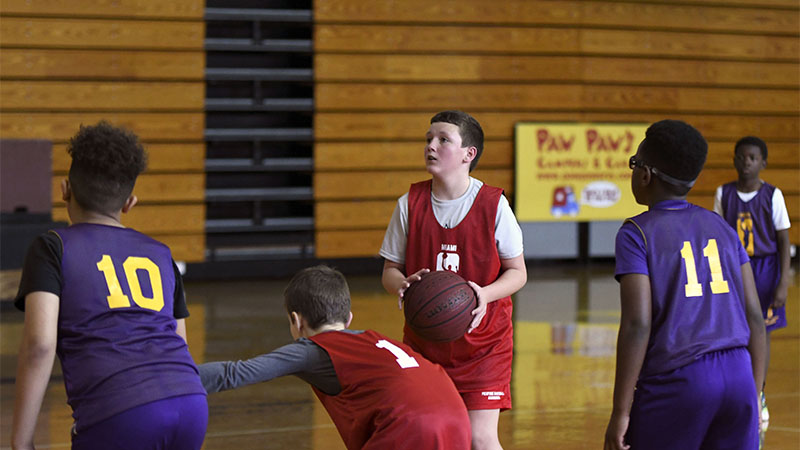 At The Line: A PBA athlete goes through his routine before putting up a free throw during a recent game. Photo by Jonathan Mitchell.

The Picayune Basketball Association is going full steam ahead with its season as children of varying ages and skill sets use the games and practices to learn about the sport of basketball.

The PBA is already a couple of weeks into its regular season with playoffs scheduled to begin March 13.

Eric Vianney runs the organization and is hopeful the league can inspire the youngsters to fall in love with the sport. “For me personally what I really enjoy about it is seeing kids improving from the first week to the last week Hopefully they’ll continue to learn and love basketball, and hopefully one day become the best version of themselves to maybe get to play in high school and college,” Vianney said. Not only do the athletes get a chance to physically exert themselves in a fun way, but they can also learn about the principles of the sport while playing it.

Basketball can get complicated with different systems and styles of play, but when broken down to its basics there’s plenty a beginner can learn while a part of the PBA.

“We try to emphasize to our coaches that we have to teach fundamentals like how to pass, catch, run, dribble and shoot. We try to find a way to have fun while learning something. Each kid is different because their attention span is different and the age groups are also different. We try to do the best we can to create an environment to be safe and enjoy themselves,” Vianney said. Getting athletes into basketball young and getting them used to the game only increases the likelihood their talent will be able to develop and flourish as the years go on. “If you think about it, if you are an artist and you start doing your craft when you are in elementary school and junior high, then by the time you’re in high school you’ll be pretty good at it. It’s just like that in basketball. The earlier you’re exposed to it, and then if you love and invest some time in it, you’re going to get something out of it. That’s what we believe,” Vianney said.

Players can use the PBA to work on specific aspects of their game before reaching the varsity level, where they’ll once again run into Vianney who is the head coach of the Picayune Maroon Tide varsity basketball team.

Vianney has been running the league for years and is already seeing a pay off with the talent coming through the system. Vianney has championship ambitions for the Maroon Tide, but to get there a team has be able to consistently bring in new, young talent. “Our best guys are coming from PBA. We’re not like other places where they’re a big city like Hattiesburg. We’re not fortunate like that. (Having the PBA), that’s what you have to do if you’re trying to win a championship,” Vianney said.