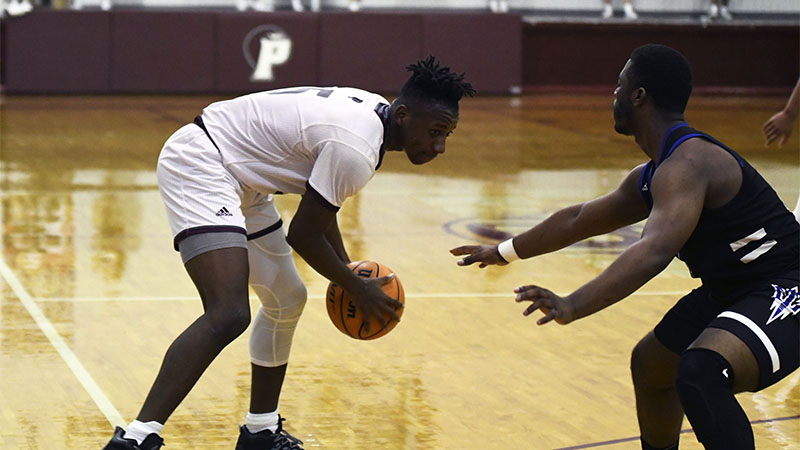 No Turnover: Derai Jones lowers the ball away from a defender as he waits for an opening. Photo by Jonathan Mitchell.

The Picayune Maroon Tide and Long Beach Bearcats battled on the hardwood for the district championship last Friday with Picayune winning 60-46.

Josh Holmes led the Maroon Tide with 14 points as the players were able to deal with the pressure that comes with playing for a district championship.

“I think those guys were focused. It was a championship game so you have to be motivated, you have to be excited and you have to come ready. It was a great environment and a great crowd. A lot of the student section showed up. It was beautiful to watch,” Head Coach Eric Vianney said.

Picayune was facing Long Beach because the Bearcats knocked off the top seed Hattiesburg Tigers earlier in the week.

The Maroon Tide’s players knew they had to take the Bearcats seriously after Long Beach handled Hattiesburg, so it was imperative the team came out with the right amount of focus and intensity.

“You have to appreciate what you have and make sure you’re ready for it because you know in the game of basketball anything can happen. Going into that game we had to make sure to remind that to our guys,” Vianney said.

A contributing factor of the Maroon Tide’s success this season has been the selfless, team first mindset Vianney has instilled in his players.

The athletes understand their roles can change during any given game, and are ready to respond and adapt to whatever challenge is presented.

“I think it was a team performance, a great team performance. As coaches we always try to tell those guys that they may or may not play a lot for one game, but that you have to get yourself ready every time because games are different,” Vianney said.

Picayune had already defeated Long Beach twice earlier in the season, but the athletes didn’t let the past results go to their heads.

Vianney’s players stayed on track and their hard work paid off with a district championship victory.

“I was proud of those guys staying focused and not losing themselves. Winning a championship game against whoever is not a given. You have to go get it and we tried to stress that before and during the game and I’m proud of those guys,” Vianney said.

Winning the district championship means the Maroon Tide will have a first round bye heading into the playoffs.

Picayune will play the winner of the Wayne County and South Jones game, which because of inclement weather has been pushed back.

Picayune’s playoff game against the winner of that matchup is currently scheduled to take place Feb. 23 at home in Kelly Wise Gym.