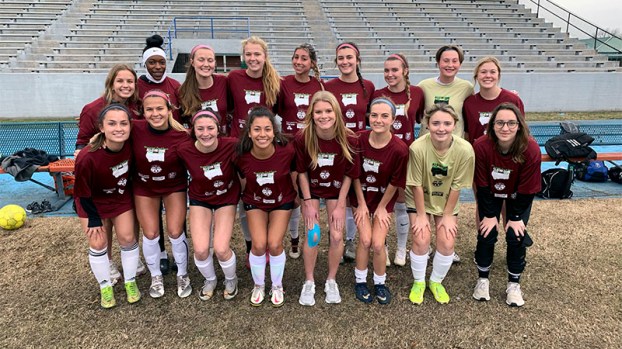 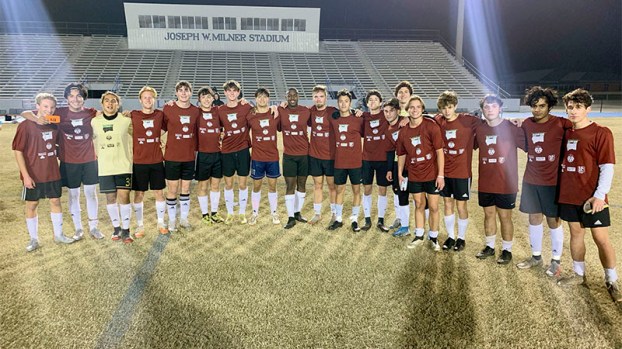 Top Tier: Joshua Thomas and Donovan Minor pose with their fellow all-stars after earning a 3-1 win.

Three Pearl River County athletes took part in the Coast Soccer All-Star games Monday evening and will be able to use the experience as a learning tool moving forward. Picayune’s Joshua Thomas and Poplarville’s Donovan Minor were part of the West Team that won the boy’s game 3-1 Monday night, and Minor won the Goalkeeper of the Game award for his performance.

Thomas is a senior, but Minor still has one year left with the Hornets before graduation and will be able to take his experience from Monday night and use it next season with Poplarville.

“It’s a big deal for a young player to play in the All-Star game. You get a lot of exposure in front of college (coaches) and you get exposure from older and more skilled players than what you’d see in just a normal high school game,” Thomas said. Minor said the level of play was higher than what he’s used to experiencing, and that the game showed him what areas he needs to improve in.

“I have to get my pace of play faster. I have to look up and find passes quicker. Every time somebody got the ball it was just two touches and then they were getting it off. There was a big difference between regular games and Monday,” Minor said.

Soccer is a sport of speed and fluidity, meaning a player’s ability to deal with pressure is key.

As an athlete develops and works on their skills, Minor said it’s important to perfect the fundamentals if they want to one day play in the All-Star game. “Coach says if you play conservative and play scared you’ll mess it up more. It’s overall just about basics. Basics can do a lot. Making little changes can make big differences. It can make you that much better at handling little stuff. If you can’t get basic stuff down then how will you get better?” Minor said.

Morgan Westling didn’t get to play in the girls game because of an injury, but she was still on the sideline cheering on her fellow all-stars during the match as her team won 2-1.

Being sidelined during the match and seeing the quality of play just made Westling want to get back on the pitch even more.

“It made me really excited just seeing them play. I start club soccer as soon as I’m released and I’ll play that throughout the summer. I’m really excited to start training again and continue getting better,” Westling said.

This was Westling’s first All-Star game experience and the high level soccer she saw Monday night will serve as inspiration for when she rejoins her Lady Hornets teammates in Poplarville.