Late three propels Picayune hoops into next round of the playoffs 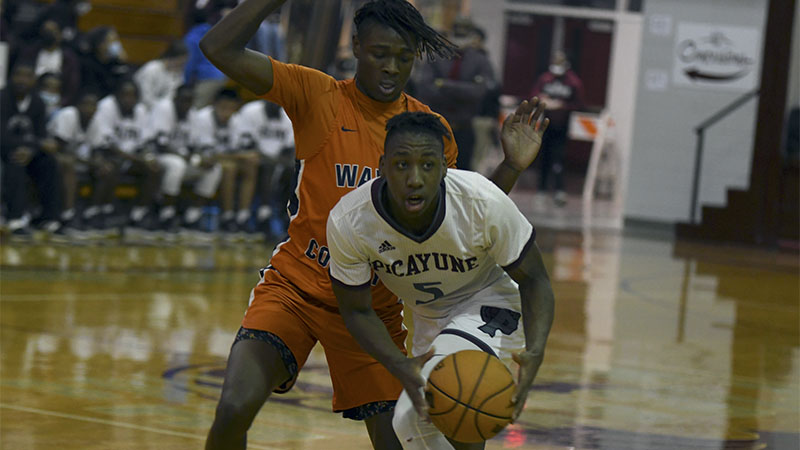 Cutting Inside: Derai Jones gets into the lane and looks for a teammate to pass to on the wing. Jones had 8 points against Wayne County in Picayune's playoff win. Photo by Jonathan Mitchell.

A back and forth playoff game Tuesday evening between the Picayune Maroon Tide and Wayne County War Eagles ended 55-52 in favor of Picayune thanks to a late three.

Both teams built sizable leads at different points in the game, but neither squad was going down without the fight as the clock started winding down.

Picayune had possession of the ball as the last seconds ticked away with the teams tied 52-52.

After a few quick firing passes, the ball found its way into Seth Stockstill’s hands who nailed a three point shot to give the Maroon Tide a 55-52 lead with just four seconds left in regulation.

Wayne County turned the ball over on its final possession as the buzzer sounded and Picayune secured the victory to move on to the next round.

Stockstill led Picayune with 12 points, while Josh Holmes added 10 points and Damarius Magee came off the bench and contributed 11 points.

The win is part of renaissance within the Maroon Tide program as Head Coach Eric Vianney has tried to instill a fearless mindset in his players this season.

Picayune came to play, and even after going down at certain points in the game, the Maroon Tide didn’t quit as the players’ self-belief never wavered.

The victory means Picayune advances to the next round of the playoffs, and will play the winner of the game between Forrest Hill and Laurel.