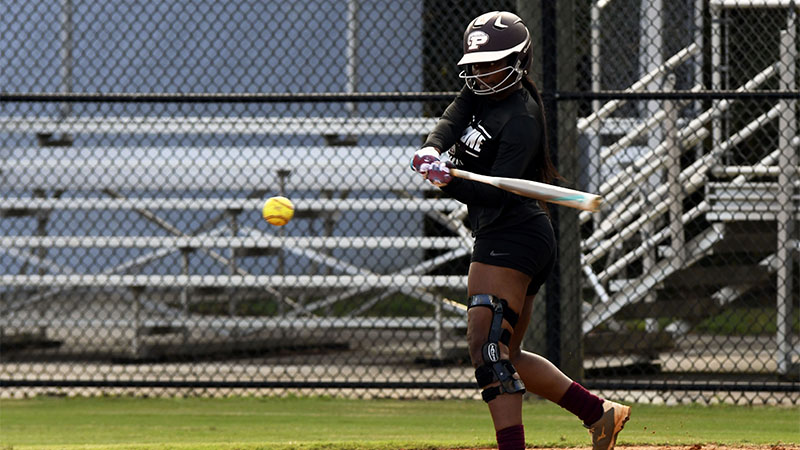 Practice Pays Off: Picayune was able to put on two strong offensive showings over the weekend thanks in part to the work the athletes had done in the batter's box during practices. Photo by Jonathan Mitchell.

The games essentially serve as scrimmages for the team with the number of innings being cut and other rules being relaxed in order for teams to make the most out of the pre-season matchups.

Head Coach Courtney Dickens said she liked her team’s power offensively in both games as the Lady Maroon Tide was able to put a lot of runs on the board.

“You can tell we’ve been doing a lot of hitting and been inside because of rain and weather because our hitting was not bad Saturday,” Dickens said.

Four freshmen saw significant playing time during the two games as Dickens tried to get her younger players varsity experience.

That led to some nervy moments defensively, but the athletes dealt with the jitters and did a good job of overcoming some early deficits.

“I was really happy with the way the girls competed. I know last year it seemed like whenever we’d get down early in the game and I would tell them, ‘We still have a lot of ball left.’ But it was almost like they’d give up early. We were actually down 3-0 in the first game and we come back and won 13-4. We were down 4-1 in the second game and tied the game up 4-4 before losing 5-4. I saw some really good things,” Dickens said.

Picayune also did a good job of not making any mistakes on the base paths.

Seeing as the jamboree matchups were the first competitive games for the athletes in almost a year some rust was to be expected, but the Lady Maroon Tide was able to minimize those errors.

“We’ve really been focusing a lot on base running because that’s something we’ve been struggling with the past couple of years. (Saturday) we were able to read some balls down and were tagging up where as before we may not have done those things. Hopefully that’ll keep getting better,” Dickens said.

Picayune’s next game will be against Harrison Central Feb. 23 before traveling to Bay High Feb. 25. Dickens hopes the positive results from the jamboree will carry over and serve as a confidence builder for her younger players.

“I could tell the way they were carrying themselves after the game that we were going to have some good days at practice because I think it makes them more exited to get to practice when they know they have a chance (of winning upcoming games),” Dickens said.