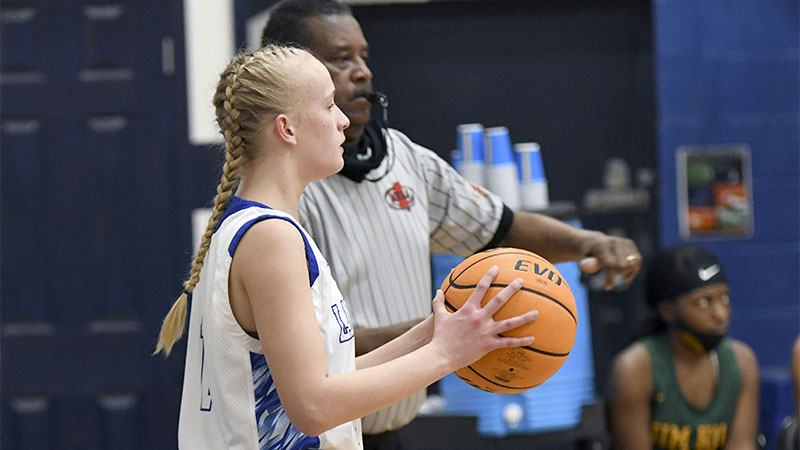 Run It: Hannah Mitchell waits to inbound the ball after calling out a set play for her teammates to run. Photo by Jonathan Mitchell.

Pearl River Central’s Lady Blue Devils took the court for the final time this season in a Sweet 16 playoff game against Pascagoula Wednesday night and lost 51-26.

The team’s magical playoff run may have come to an end, but there were some standout performers as senior Jada Lindsey put up 14 points, 9 rebounds and two blocks in her final game as a Lady Blue Devil, while freshman Emily Carroll added 7 points. For the team’s two seniors, Lindsey and Anna Carroll, the loss to Pascagoula was their final game in a PRC jersey, but Head Coach Cliff Bauer said the loss didn’t take away their sense of accomplishment after such a successful season.

“They were sad, but also PRC hasn’t been to the Sweet 16 in a really, really long time. They were both still very grateful for our season,” Bauer said.

The majority of the athletes are underclassmen, which means they’ll have plenty of time to develop their skills and become top tier players at the varsity level.

Considering the Lady Blue Devils lost out on practicing last spring and some of the summer because of the pandemic, Bauer said the focus this year will be getting his players into competitive environments over the summer.

“What I’d like to do for the summer, if they let us have basketball, is to have us play teams that are considered elite, even if we get beat, because that’s the only way we get better. That’s what it takes and in the summer basketball wins and losses are irrelevant (anyway),” Bauer said.

PRC will lose a lot of size down low with Lindsey and Carroll graduating, which means the Lady Blue Devils will have to focus on other avenues of winning games besides bullying teams in the paint. For Bauer, the solution to that problem will be having a high percentage shooting team that’s efficient offensively.

“If you’re going to play this game you can’t make excuses about teams that are bigger, faster and stronger. You have to find a way to counter that and shooting the ball in basketball is the great equalizer,” Bauer said.

New classifications came out this year, meaning the teams in PRC’s district for next year won’t be the same ones the Lady Blue Devils went up against this season.

Bauer said with the new competition coming in, and the plethora of returning players, the expectations next season are going to be sky high.

“We want to be district champs and have a first round bye. One thing I’m learning is that home court is invaluable and I never put so much weight into it until I became a head coach, but the kids perform better in the gym we shoot in every day. The goal is not only to have home court advantage, but as district champs also have a bye. It’s possible and the kids believe, so that’s going to be the goal,” Bauer said.