Ending February on a warm note 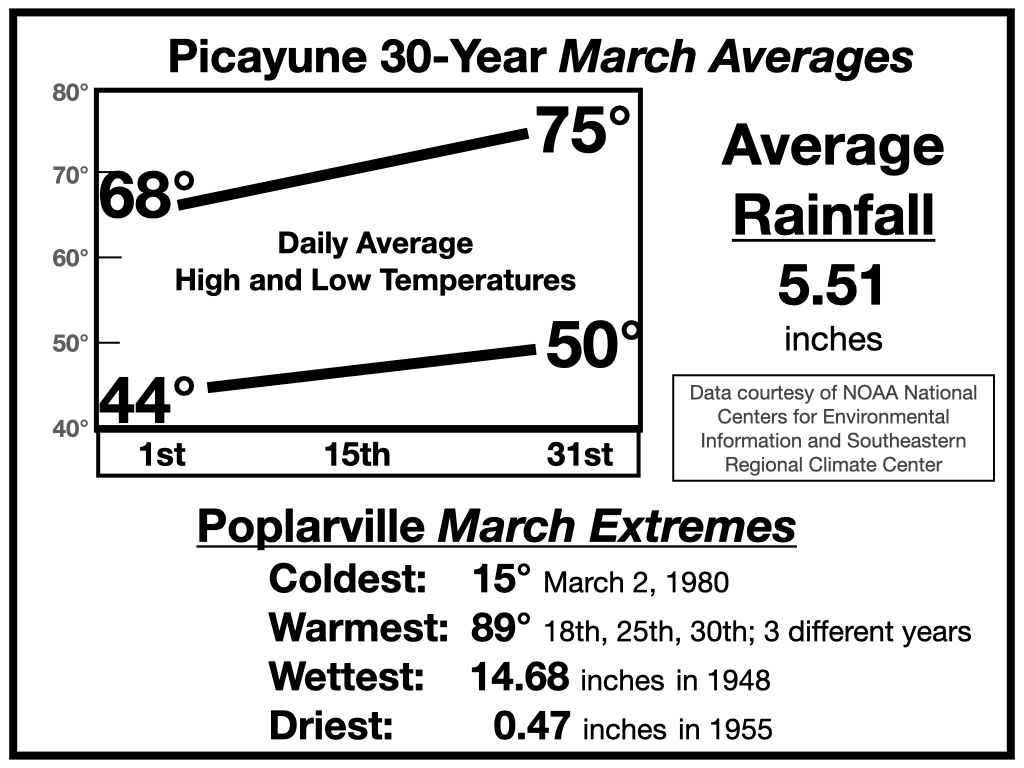 Friday was the first time since the second week of November that temperatures in Pearl River County came close to 80 degrees. This weekend, the last in February, will offer two more days when afternoon highs will flirt with that level of warmth.

Historically at the Poplarville Experiment Station, the first 80 degree readings of the year have occurred most frequently in March (46 percent), followed by February (31 percent), and January (18 percent). In a few cool years (6 percent), the first 80-degree day has been delayed until April.

A frontal boundary is forecast to stay to our north over Arkansas and northern Mississippi most of the weekend, keeping us in mild and rather humid air.

The front should begin heading our way by Monday, but there’s uncertainty as to when, or even if, it will pass through. That translates into a higher amount of uncertainty in the temperature and rain forecasts to begin the month of March.

The best bet is that we will see considerable cloudiness and occasional rounds of showers during the first half of the work week with temperatures slightly cooler than this weekend, but certainly not cold.

For recordkeeping purposes, meteorologists designate March as the first month of meteorological spring, which is usually an appropriate characterization of how it looks and feels in south Mississippi.

Temperatures can still swing dramatically from day-to-day and week-to-week in March as cold and warm fronts still frequently pass through the area. Those fronts and their associated low pressure systems combine with generally warmer conditions near the surface and continued cold air aloft to increase instability and the threat of severe thunderstorms compared to February. Historically, our risk of severe thunderstorms with high winds, hail, or tornadoes continues to increase in April and reaches its annual maximum in the month of May.  However, during the upcoming week, it appears that run-of-the-mill showers are much more likely than severe storms.

The senior center is a place for us

Jesus is the best teacher for a child

A time and place for everything