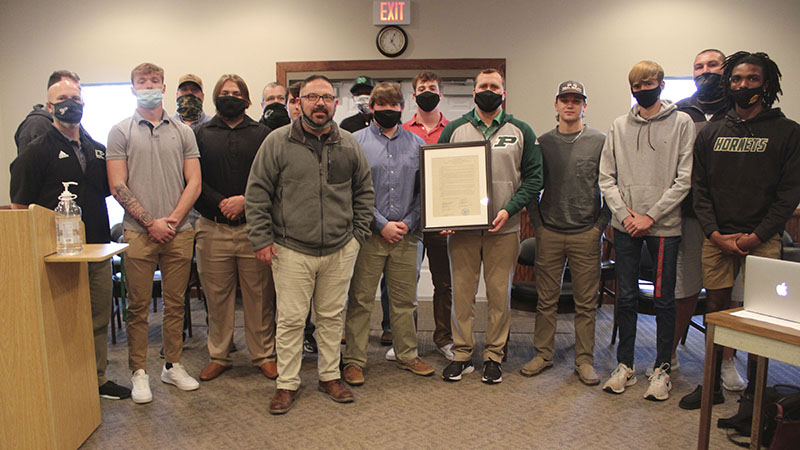 Seniors from the Poplarville Hornets football team stand with Head Coach Jay Beech, Mayor Rossie Creel and members of the Poplarville Board of Aldermen to receive recognition for the team’s 2020 season.

The Poplarville Hornets football team was honored by the city’s administration Tuesday evening for winning the 2020 Mississippi Class 4A South State Championship this past season.

The game “will be remembered as one of the muddiest, yet dominant south state championships in recent years,” the motion states.

In a separate matter, the city is pursuing grant funding to replace the dock at the Poplar Springs Lake, which has suffered from extensive termite damage. The Board approved engaging Dungan Engineering to assess the damage and assist in preparing the grant application.

The wood in the dock was replaced only four or five years ago, said Public Works Superintendent Sam Hale. The city would be responsible for half the cost of the project if the grant is awarded, but that award will not be determined until next year. The dock needs to be replaced to meet handicap accessibility requirements.

—Heard an update that the Poplarville Police Department is again having trouble submitting crime reports to the state, this time due to an issue with a location code being eliminated from the state system, but is still in the department’s system.

The next Board meeting will be Tuesday Feb. 16, at 5 p.m. in Poplarville’s City Hall.