Vaccines in state said to ramp up 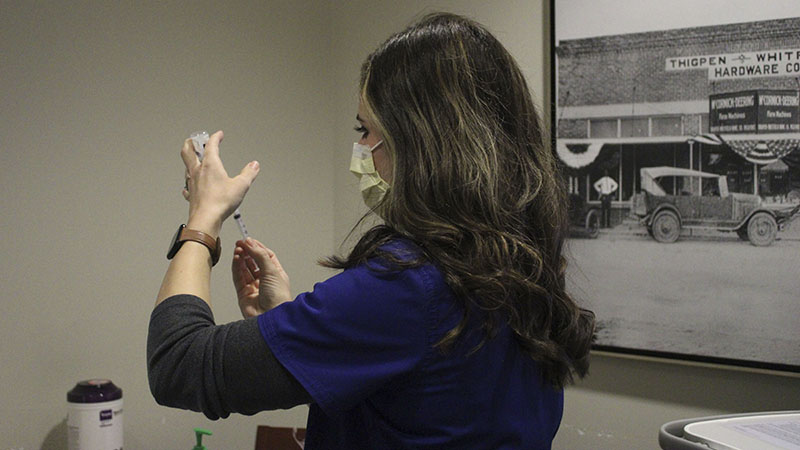 Katy Foulon prepares to administer a COVID-19 vaccine at Highland Community Hospital. Mississippi will see an increase in the number of vaccines coming into the state next week, from 37,000 to 43,000.File photo by Cathy Cook | Picayune Item

The number of weekly vaccinations being allocated to Mississippi will increase to 43,000 next week, which will mean additional vaccine doses at community partners like hospitals and health clinics.

Mississippi has routinely been receiving 37,000 vaccine doses per week to use for first doses, said State Epidemiologist Dr. Paul Byers. Second doses are allocated separately. The federal government has informed Mississippi it can anticipate a 16 percent increase in vaccine allocation over the next several weeks, said State Health Officer Dr. Thomas Dobbs during a press briefing Friday afternoon.

While the Mississippi State Department of Health immediately distributes vaccine doses and does not have an inventory, the long term care facility vaccination program was pre-assigned doses and works from an inventory, said Dobbs.

Highland Community Hospital in Picayune is one of the community partners vaccinating Mississippians, so the increase might mean more doses at that facility. Last week Highland’s vaccine waitlist was so long staff stopped adding people to it, according to previous coverage.

Vaccines are distributed to sites throughout the state based on general population and the population of people in the risk groups such as those people who are 65 and older, healthcare workers and people with chronic medical conditions that put them at risk. The medical conditions include diabetes, obesity, smoking, cancer, lung disease, kidney disease, heart conditions, pregnancy, sickle cell disease and immunocompromised due to an organ transplant.

Over 200,000 Mississippians have received their first dose of a COVID-19 vaccine, of which 23,437 second doses have been administered. There have been 2,722 doses administered in Pearl River County.

Over a third of Mississippians 75 and older have received vaccines, said Dobbs.

There are 19 drive-thru sites available in Mississippi and two more should be opening next week, one in Warren County and one in Lawrence County, said Senior Deputy and Director of Health Protection Jim Craig.

Some counties are exploring additional drive-thru sites, said Craig. But there are a lot of challenges, the biggest being staffing and having enough vaccine to support a robust operation.

If there is a vaccination delivery system, such as clinics or hospitals, working well in a county they may not need a drive-thru site, he said.

The state is starting to see declines in the number of people hospitalized with COVID, and the number required to go to the ICU and on a ventilator due to COVID. The number of emergency department visits for COVID related illness is also beginning to decline, said Byers.

However, the surge the state saw over the holidays was significantly larger than the surge in COVID-19 cases last summer, so there is still widespread transmission throughout the state, said Byers.

In December there were over 1,000 COVID related deaths in Mississippi, and 935 people have already died due to the virus in January, said Byers. The large summer surge led to approximately 700 deaths in July and 800 in August.

Prevention measures like mask wearing, social distancing and avoiding large gatherings are still important, because the population is still a long way away from herd immunity, said Byers.