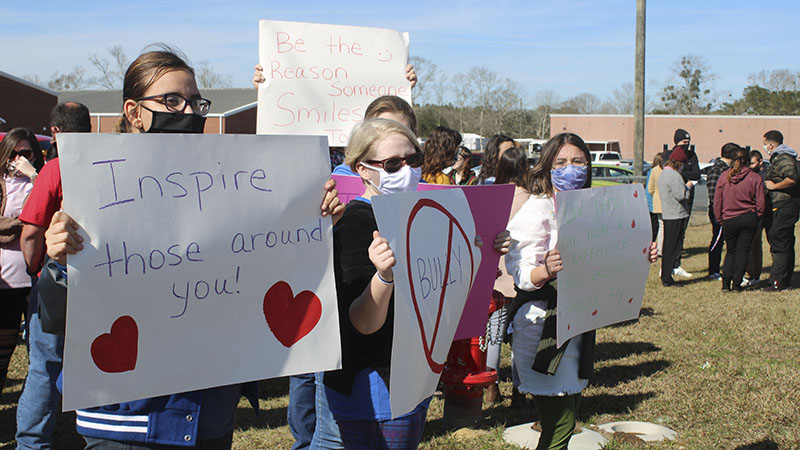 Former and current Pearl River Central High School students held signs in front of the school’s gates Thursday to bring awareness to bullying and suicide prevention. Parents and school staff were also at the event to show their support. Cathy Cook | Picayune Item

Former and current students of Pearl River Central High School gathered on Thursday afternoon to raise awareness of bullying and suicide prevention.
Teachers and parents also came out to show their support.

Jade Howell graduated from the high school in 2018 and decided to organize the event after finding out one of the school’s students died by suicide recently.

“I hope that somebody here, maybe somebody who will hear about this later, will realize that, ‘Hey I’m not alone, and there are options, I can talk to somebody,’” said Howell.

Howell experienced bullying from both students and a teacher during her time at the high school. She said she would like to see regular bullying awareness and rallies at the school.

“Some people feel like mental health is an embarrassing topic and something that they’re not able to speak up about,” she said.

Organizer Annie May Kellar was glad so many students and faculty came to the rally in front of the high school’s gates.

“This is for Gavin, but it’s also for the awareness of what’s happened in the school. If I can get that awareness out and let everyone know we’re here for them, that’d be great,” said Kellar.

Gavin Pell was a student at the school who recently died by suicide.

Kellar is a 2018 graduate and experienced bullying during her time at the school.

“You fill out as many bullying reports as you can, but once you realize that all they do is talk to them and the bullying gets worse, it’s kind of hopeless,” she said.

“I hope it helps people to see there is a community out here that cares about them,” she said.

Organizer Mary Martin said she had to get her GED in 2017 and 2018 instead of finishing high school at Pearl River Central because of the bullying she experienced there.

“I was an autistic student here and I just feel like this school is not properly equipped to deal with students who are neurodivergent and I wasn’t supported,” she said.

She left the school district in middle school and again in high school due to bullying.

Julia Souders is one mom who worries about her autistic child being bullied at school, because Souders’ daughter is not very outwardly expressive with emotions.

“If she’s being bullied, I would never know until something bad happens.”

Superintendent Alan Lumpkin said that staff were at the rally to listen and find out how to better serve current and future students. The district has a zero tolerance bullying policy and has ways to report bullying, including an anonymous reporting platform.

“It is safe to come and report things, because we do address it,” said Pearl River Central High School Principal Kimberly Alford.

Lumpkin said that when bullying is reported the school district responds with a combination of conflict resolution and discipline, as is necessitated by the specific situation.

“The biggest challenge that we have is creating a place where students feel safe to report that,” said Lumpkin.

All teachers are trained in suicide awareness and prevention, said Lumpkin. The school district also uses two different types of software filtering on school issued devices and school email addresses that look for words that indicate self harm or harm to others, said Alford.

The program then notifies the school, which can notify parents.

“Any time a student were to look at something that indicated self harm we are alerted,” she said.

The high school has a licensed clinical social worker on campus available to students.