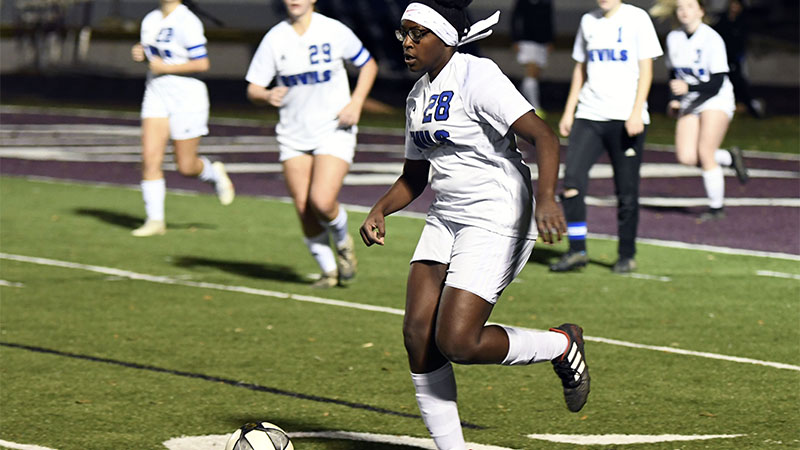 Bringing It Out: Defender McKenzie Hepler dribbles the ball out of her own box during a recent Lady Blue Devil game. Photo by Jonathan Mitchell.

Anna Grace Atwood and Allie Cunningham both scored twice while Alyssa Fleming added a goal of her own in PRC’s dominant victory.

The win sent the Lady Blue Devils to the second round of the playoffs.

Head Coach Joe Weems said his team’s performance improved throughout the match as the athletes started implementing some of the strategies they’d been working on in practice.

“It got better as it went along. They were finally doing some of the things we were begging them to do like taking shots from the outside. I think it was a positive step in a positive direction,” Weems said.

Pressure wasn’t a problem for the players and the stage didn’t seem too big for the team.
Weems said his athletes were calm and confident before the game, which is good for a team that has very little playoff experience like PRC.

“Last night they seemed pretty loose going into it, but it’s hard to find out what our true identity is. Sometimes we act like we’re on our heels and scared, then sometimes in bigger games we come out loose and nothing is on their mind,” Weems said.

Now the Lady Blue Devils will begin preparing for their second round opponent, the East Central Lady Hornets.

East Central won its first round match against South Jones to set up a second round game against PRC that will take place Jan. 30 at 5 p.m. The Lady Blue Devils will have home field advantage for the second round game.

However, the alteration to the team’s normal schedule and playing the game on Saturday instead of the usual Friday could have an effect.

“It doesn’t seem like a big deal, but little things like that affect these athletes. Just being a different evening than we normally play can have a huge effect on whether they show up or not,” Weems said.

Weems has made it clear to his athletes what it’ll take to beat a talented East Central team.

The Lady Blue Devils have formed an identity this year based on foiling opponents’ attacks before they begin.

PRC will clog up the midfield and prevent the other team from having the time or space necessary to pick out incisive passes.

Weems said it’ll be more of the same for the Lady Blue Devils Saturday night.