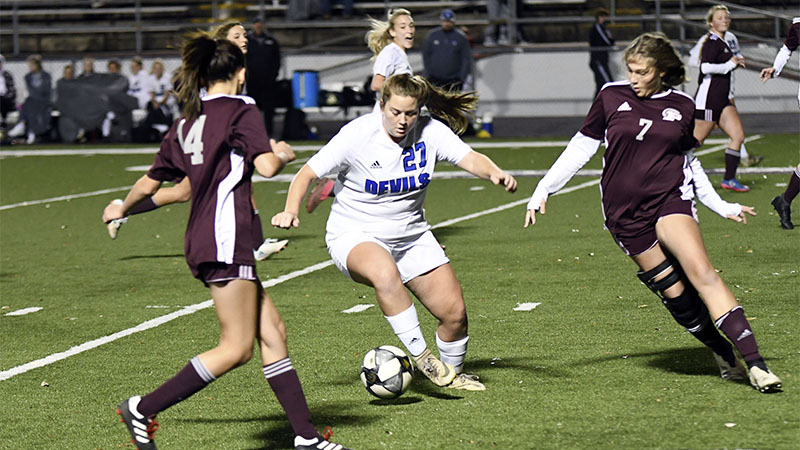 Pearl River Central’s soccer teams took the pitch Tuesday night in a late season, non-district game against West Harrison that ended with losses for both of PRC’s teams.

PRC was down big at the half, but was able to fight back for a 4-2 loss against West Harrison. Jacob Turnage and Noah Verweij scored for the Blue Devils.

The Blue Devils were coming off an emotional loss to Picayune last week that ended the team’s postseason dreams.

“It was a big drop off. We expected for them to come out flat, but we didn’t expect them to come out that flat. The guys played hard, we’re just still making the same mistakes,” Head Coach Joe Weems said.

The team’s final game will be against Long Beach on Jan. 22, and it’ll be the last game for the team’s seniors to represent PRC.

Weems said the athletes are usually pretty self motivated, but seeing as it’ll be the end of some players’ careers, the emphasis will be on the younger players stepping up and giving it their all against the Bearcats.

“You say (this senior) all year long has played hard for you and this is the last game so you want to leave on a good note regardless of the result. Win or lose you want to go in and play a tough game. You have to ask the young players to give back, and some of them will be there next year and have a final game and it’ll be something they want to remember as well,” Weems said. The away game for PRC will come on a day where plenty of rain is in the weather forecast.

Weems said Long Beach’s field can get pretty messy when it’s wet, so that’ll be another factor in the team’s performance.

“It’s going to be nasty because it’ll rain all day and that field is a bog so that’ll be a factor in how the ball moves and the pace of play. It’ll make things a lot more interesting,” Weems said.

The Lady Blue Devils lost 4-0 to West Harrison, which might’ve been caused by the players having their eyes on the Long Beach match.

If PRC wins, it’ll be the number one seed and get to stay home for its first round match.

However, if PRC loses to Long Beach that will end the team’s regular season as the second seed and cause the Lady Blue Devils to travel. “I don’t want to put extra pressure on them, so I’ll just tell them to go out and have fun and do the best they can. I’m not going to press them. Let’s just play hard and have a good time, and if they can say they came off field and did that we’ll take it,” Weems said.

The majority of the team has no playoff experience, so it’ll be important that the athletes make the most of the Long Beach match in preparation for their first round opponent.

“Whatever it feels like (against Long Beach) they should just take that and put it in their pocket. That’s how it’ll feel like no matter who they’re playing (in the playoffs). They can get a feel as far as the energy level and the emotions they have,” Weems said.