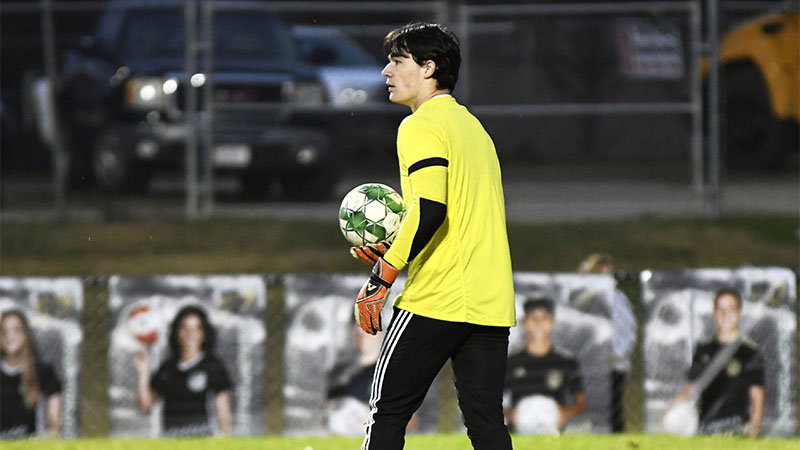 In Front Of The Net: Junior goalkeeper Carson Lajaunie prepares to boot the ball down the field after making a save during a recent game. Photo by Jonathan Mitchell.

Alyssa Fleming recorded a hat trick, Anna Grace-Atwood had a brace while Monica Caro and Leigha Trahan each scored once.

The dominant display moved PRC to 3-1 in district play with the end of the regular season fast approaching.

PRC has been steadily improving all year and Head Coach Joe Weems said his players did a better job of staying in position against the Lady Tigers.

“We’ve been trying to keep people where they need to be and they did a good job of protecting the back line. We did a good job of holding possession on (Hattiesburg’s) side of the field and kept things pushed up most of the night,” Weems said.

The seven goals will help with goal differential, which could be the difference maker getting into the playoffs if the Lady Blue Devils have the same record as another district team.

However, Weems said his players could’ve had more if they’d done a better job of picking their shots during the Hattiesburg game.

“The way we were finishing was much improved, but we can still get better. We need to start shooting from the outside more. They make unnecessary passes to try and put themselves in a better position to score but then they turn the ball over,” Weems said.

PRC won 2-0 against Hattiesburg thanks to a deflection off a defender that scored and a goal from Noah Verweij.

Weems said his players did a better job of taking shots outside the box, but that the location needs to be better in the future.

“Most shots were right at the keeper. We were not working the corners like we needed to do. We were under a lot of pressure to release it and we wouldn’t have a good shot because of that,” Weems said.

The team will take on the Long Beach Bearcats Jan. 12 before a make or break game against Picayune on Jan. 15.

Training sessions leading up to the Maroon Tide match will focus on the basics as PRC looks to take control of playoff seeding.

“We’ll go in and try to do the same things. Try to improve shape, pace of play, receive and release two-touch soccer, play to the outside and keep on trying to do that. Wednesday and Thursday we’ll cover all of our bases. We’ll do free kicks and corner kicks, then run the kids through (penalty kick) work in case we have an overtime match,” Weems said.