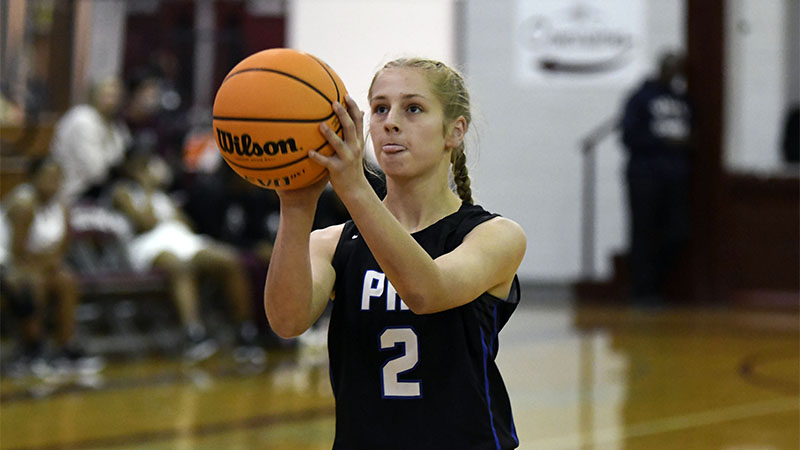 At The Line: Eighth grader Carsyn Cacioppo takes her time and goes through her routine before taking a free throw. Photo by Jonathan Mitchell.

Pearl River Central played Forrest County Tuesday evening in a set of non-district games that saw PRC win one and lose the other.

Tyaon Terrell added 13 points and 5 boards as well for the Blue Devils.

“I thought we executed pretty well for the most part. Defensively we tried some new things we’re trying to get better at leading up to district play and the playoffs. I thought it was a good night all the way around,” Head Coach Scott Stephens said.

The coaching staff has upped the intensity of practices and workouts as the season has progressed.

Now only a couple games separate PRC from the district tournament, so it’s important the players come ready to work every day.

“You want to be playing your best basketball down the stretch. That’s our goal. Every time we’re in (the gym) for practice or to have a game we try to make it as important as possible because it is, especially now that the season is starting to wind down and we’ll start to get into tournament play,” Stephens said.

Often times in college or professional basketball, teams will shorten their rotation and have their starters get more minutes for playoff games.

Tuesday, 13 athletes saw time on the court against Forrest County, but that number will decrease as the season winds down.

The district tournament has postseason intensity because it determines what teams make the playoffs, so Stephens and the Blue Devils are now in the process of figuring out what personnel will best suit PRC’s needs when the pressure is on.

“It’s just about understanding the situation. We have to put our best five out there to give us the best opportunity to win and the kids understand that. It’s up to them to come every day to practice and be in that top eight. I don’t pick that they do. They understand what to do to get there and they understand what they’re trying to accomplish so they’re ok with it,” Stephens said.

The Lady Blue Devils lost a close game 51-47 even though three players scored in the double digits.

Hannah Mitchell led the team with 13 points while Jada Lindsey and Nia English each added 10.

The pace of play affected PRC, but Head Coach Cliff Bauer said the result serves as a learning opportunity.

“It was good for the kids, it really was, and for me as a coach. From a coach’s perspective there were a lot of things I learned after that game,” Bauer said.

Every season is like a rollercoaster with ups and downs, especially this year given the Lady Blue Devils are competing in the midst of the COVID-19 pandemic.

The loss to Forrest County, and how the team responds, will be a big part of the team’s success or failure moving forward.

“I think this is going to be a big one to see how we bounce back from this one. I think we were supposed to win that game, so now we’ll see if we learn from it,” Bauer said.