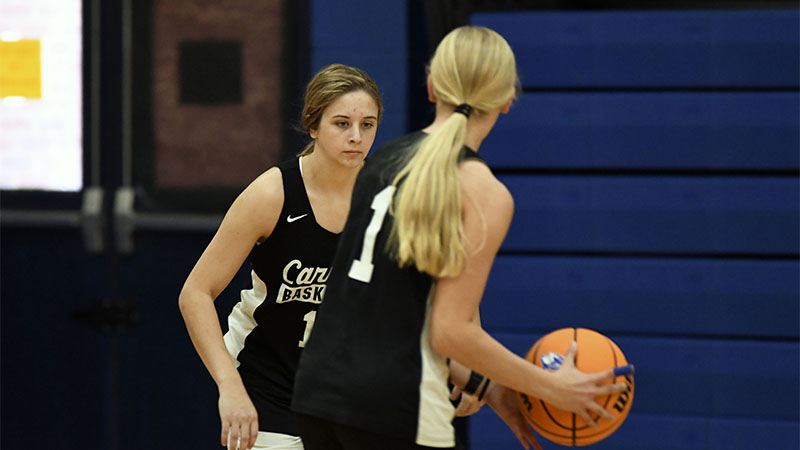 The match up with the Lady Warriors was the first competitive game in nearly three weeks for the Lady Blue Devils because several opponents canceled games after going into quarantine.

Oak Grove presented a tough challenge for PRC, but Head Coach Cliff Bauer said he was happy with his team’s tenacity against the Lady Warriors.

“I was pretty pleased. Oak Grove has been probably the best team we’ve faced all year and I thought we did pretty good. It was a good experience and the kids played hard. We battled back,” Bauer said.

Facing a talented, physical team after not playing since mid-December presented some challenges.

Bauer said the high level of competition after weeks of just practice led to some bumps and bruises that were felt the following day.

“This team was more physical than any other we’d faced. I think from not playing, and then going a million miles an hour (is tough) because with practice it’s hard to replicate what you do. I do think it took a toll on us that we weren’t used to,” Bauer said.

An injury forced Bauer to play some younger athletes against Oak Grove, including Emily Carroll who had 8 points for the Lady Blue Devils Monday night.

Younger athletes have been seeing more time on the court this year as Bauer had made sure to prepare all of his players for the eventuality of a player suffering an injury or going into quarantine.

Getting on the floor with Oak Grove served as another opportunity for players like Carroll to get comfortable as the team now looks ahead to an important district match up against Picayune on Dec. 9.

“I think it was huge, I really do, the fact they got reps in. Another thing is our field goal percentage is at the best it’s been all season. The layoff was bad, but we were able to shoot a lot and playing that game (against Oak Grove) helps us get into game speed and make good decisions. I think it’ll only be beneficial that we played,” Bauer said.