PRC and Picayune meet on the hardwood 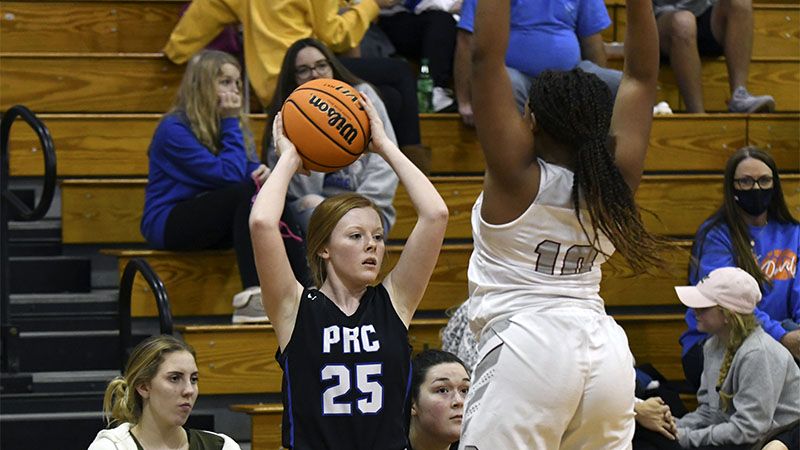 No Room: A Lady Blue Devil player tries to find an open teammate as a Lady Maroon Tide player blocks her vision during an inbounds play. Photo by Jonathan Mitchell.

The basketball teams from Pearl River Central and Picayune faced off last Friday evening with the schools splitting the two games.

The Lady Blue Devils won 42-15 against the Lady Maroon Tide thanks to 9 points from Laura Cate Lumpkin and a near double double from Jada Lindsey who finished the game with 8 points and 10 rebounds.

Head Coach Cliff Bauer went to his bench often against Picayune and said some of the team’s younger athletes outperformed the team’s starting lineup.

“I was very pleased with that. I think it was big and it was eye opening to see that. Some of kids have started to perform and started to get better, and I was able to see that in that game. It helps us going forward, not just in the district tournament, but also next year because we are so young,” Bauer said.

Next up for the Lady Blue Devils is the Forrest County Lady Aggies tomorrow night, who will provide a challenge Bauer is looking forward to.

Forrest County usually runs a full court press against opponents, which has been a weakness for PRC this season.

Breaking the press has been a point of emphasis in practice, so much so Bauer had the junior varsity boys team come to a practice so his athletes could battle against a press in a game like situation.

“They’ll press tomorrow night, which is what we have to handle from Hattiesburg, so it helps us a lot and we’ve also been working on plays for the district tournament. We can use them a couple times to prepare them (for district games),” Bauer said.

Going up against a team that presses, in a non-district game, will give the athletes a good opportunity to improve without worrying about district seeding.

“I have a great point guard in Hannah Mitchell, but I need other kids to be able to make better decisions, because against a well coached team they’ll take Hannah out of the game. So that’s what I’m looking to see, smart basketball,” Bauer said.

Picayune defeated PRC 57-31 to sweep the Blue Devils in the season series.

The district tournament is fast approaching, so getting a win over a district opponent like PRC is not only helpful seeding wise for Picayune, but it also stretched the team’s win streak to five games.

Head Coach Eric Vianney has talked all year about the importance of his team reaching its pinnacle of play prior to the start of district tournament, and five straight victories shows the team is headed in the right direction.

“For us, this is when you want to start playing the best and performing at a better level. Our guys, they played with great intensity and great focus. We played (PRC) already once and we were just trying to get better from that game,” Vianney said.

Picayune’s next opponent is the Hattiesburg Tigers on Jan. 26, who defeated the Maroon Tide earlier this year.

Vianney said the Tigers provide a challenge that his team will have to learn to deal with if they want to make it to the postseason and be successful.