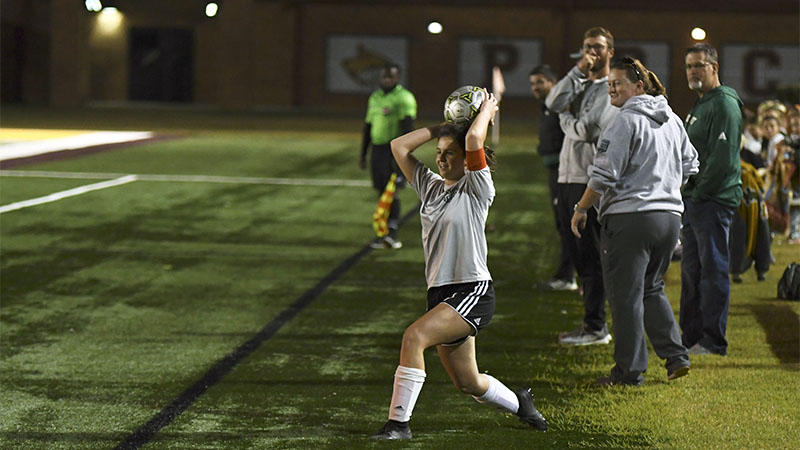 Out Of Bounds: Senior Mollie Brown goes to throw the ball in during a recent game. Photo by Jonathan Mitchell.

The Hornets and Wildcats were so evenly matched that even after two overtime periods the teams remained deadlocked.

It came down to penalties, and Poplarville’s goalkeeper Donovan Minor made several saves before Preston Stuart scored the final penalty kick to give Poplarville the win.

“Any time we play Greene County it’s always super emotional, very dramatic. It seems like it’s always between us or them for the district title or second place spot,” Head Coach Luke Gipson said.

The win moved Poplarville into the second playoff spot with just two district games remaining in the season.

Winning in such a high pressure situation wasn’t common for the Hornets a few years ago.

However, over the past couple of seasons Poplarville has had success winning games in overtime or via penalty kicks.

“They fortunately have been in those scenarios and we’ve won quite a few of them as of recently. They were fairly confident. They’re just more composed because they’ve been there and have a won a few overtime games last year. They felt good about it,” Gipson said. The Hornets’ next match will be against the Purvis Tornados on Jan. 14, a team Poplarville crushed 6-1 earlier in the season.

The Lady Hornets defeated the Lady Wildcats 2-0 thanks to goals from Chasity Dearman and Madison Rester.

Poplarville played Thursday and Friday of last week, then only had two days off before the match up with Greene County.

The athletes got off to a slow start, but were eventually able to break the deadlock and secure the win.

“We didn’t play with the same kind of energy, but it’s at this part of the season you just have to grind out wins when you can get them,” Assistant Coach Anthony VanCourt said.

Dearman has been a consistent performer for the Lady Hornets this season up front and has scored 12 goals already this season.

The senior has plenty of experience, and pairs that with her talent to lead the Lady Hornets attack.

“She can turn a game on its head. She’s certainly turned it on the last few weeks because it seems like every game we play we’re down somebody, so it helps to have players step up,” VanCourt said.

The Lady Hornets have dealt with injuries all season and several players were out of the line up against Greene County.

Less depth means the athletes have to play more minutes, which can lead to fatigue.

VanCourt said the holiday break didn’t help with the team’s fitness level, but with the end of the season fast approaching there are more important things to work on.

“At this point, even though the break affects fitness, you can’t work on bringing fitness levels back up considering the games you have scheduled. They’re already tired from a long season, so we’ll work more on the tactical side of things and hopefully try to push through and get ready for the playoffs,” VanCourt said.