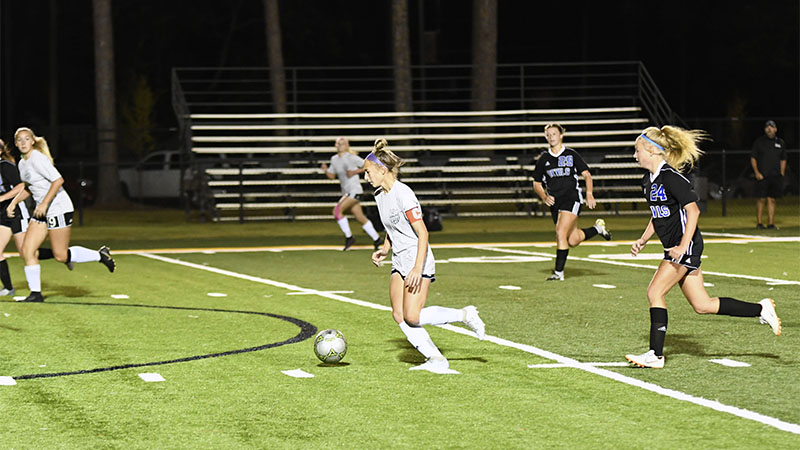 Middle Of The Pitch: Juliana Wells dribbles the ball into the attacking third for the Lady Hornets during a recent game. Photo by Jonathan Mitchell.

Poplarville’s soccer teams took on Purvis Thursday evening as the Hornets and Lady Hornets came away with victories.

Poplarville won in convincing fashion against the Tornados 5-0.

Seth Santiago had a brace while Spencer Stuart, Aiden Bond and Devin Ladner each added a goal of their own.

Head Coach Luke Gipson was hoping his starters would build a big enough lead he’d be able to get some younger players on the pitch.

“They executed that game plan. It was weird for the starters who are used to playing all 80 minutes to sit on the side, but they played well. Spirits (were high), communication was good and the whole bench got to get in and play 20 to 30 minutes. It was a good night all around for us,” Gipson said.

Getting younger players minutes has been a priority this season.

Not only does getting inexperienced players time on the field help with player development and the future of the program, but given the possibility of athletes having to quarantine or an injury occurring it adds depth to the roster.

“Throughout the season I’ve tried to find spots to put in younger guys where they have a chance to be successful and gain confidence. I think we’ve played our full (strength) team maybe twice (because of injuries or quarantine) so it’s been crazy,” Gipson said.

COVID-19 has brought with it plenty of uncertainty and there have been several times line up changes have had to be made with players out.

This has led to some Hornets playing in positions they’re not used to, but Gipson said his athletes are willing to do whatever is necessary for the team.

“They’ve seen the benefits of playing that way and I think that’s what helped this year with them buying into, ‘Ok this player may be better here, but can’t play (this other position) but I can,” Gipson said.

Poplarville’s next match up will be against Greene County on Jan. 19.

If the Hornets win, they seal a playoff spot.

If they lose it’s still possible the team makes it into the postseason, but the Hornets will need some help from other results around the district.

The Lady Hornets won 2-0 against Purvis Thursday evening as Chasity Dearman once again found the back of the net for Poplarville along with Juliana Wells.

The win all but guaranteed the team a spot in the postseason, but Head Coach Beth McShea said the performance could’ve been tighter.

The Lady Hornets will monitor some other matches across the district to help determine whether or not they’ve secured a playoff spot before heading into the team’s Jan. 19 game against Greene County.

Several players have been or are currently out injured, so McShea is hoping to use the Greene County game as a way to get the athletes back in the rhythm of things before a playoff match.

“We’ve been in a little slump so we’re going to try to get out of that Tuesday and hopefully get up enough so we can get subs in and get them some time,” McShea said.

The Lady Hornets will take on Greene County at 5:30 p.m. with the boys game following at 7 p.m.