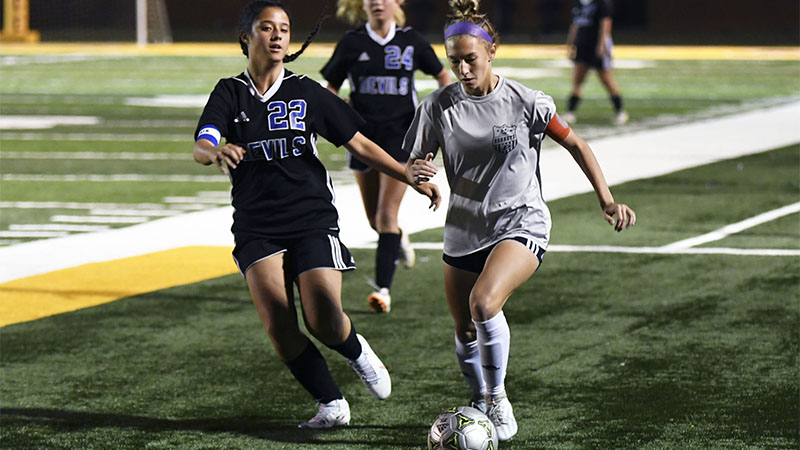 Undefeated: The Lady Hornets have not lost a district game this season, including a 7-0 win over Forrest County Monday evening. Photo by Jonathan Mitchell.

The Poplarville soccer teams took on the Forrest County Aggies Monday evening with both the girls and boys teams earning dominant wins.

The Lady Hornets won handily with a score of 7-0 that saw seven different players find the back of the net.

Assistant Coach Anthony VanCourt took the helm for the Lady Hornets since Head Coach Beth McShea was out.

The team started slow, but Poplarville was able to find its rhythm and then the goals wouldn’t stop coming.

“The break impacts us a little bit as far as not getting practices in. We struggled a little bit with fitness and came out a little slow, which we anticipated coming back from break. However once we settled down the girls started to get into the game,” VanCourt said.

The win moved the Lady Hornets to 4-0 in district play, which puts the team in a strong position to secure the number one seed.

VanCourt said the team’s overall experience and strong group of veteran players has helped the Lady Hornets secure tough wins that may have been losses in previous years.

“We’re fortunate that we have a bunch of seniors, which is always good. We did have some younger players contribute, but having the seniors who have been through this for a few years helps us,” VanCourt said.

Poplarville dominated Forrest County in the late game winning 7-1 to move to 3-1 in district play.

Devin Ladner had a brace, but the story of the night was Aiden Bond who had five goals for the Hornets.

Bond, a sophomore, has been pushed into action this year due to line up changes, and has used the experiences to become a useful contributor for the team.

“He has been motivated and coming on strong. It’s good for him because that’s another piece we needed to develop. I’m excited about him because he’s put in the work and has a great mentality about it,” Head Coach Luke Gipson said.

Both teams are now preparing for an important match up against Stone County on Dec. 8.

A win would all but guarantee playoff positions for the teams, so there’s plenty on the line.

Gipson’s squad lost in overtime to Stone County earlier in the season, and he said he’s expecting another close game Friday night when the two teams meet on the pitch.

“Going into overtime last time with us missing players is giving us encouragement (for this match up). I’m prepared for another overtime or one goal differential game. I think it’s going to be really cold and a really physical game. It’ll just come down to how in shape we are, how healthy are we and if we can last,” Gipson said.