Poplarville loses final game and misses out on playoffs 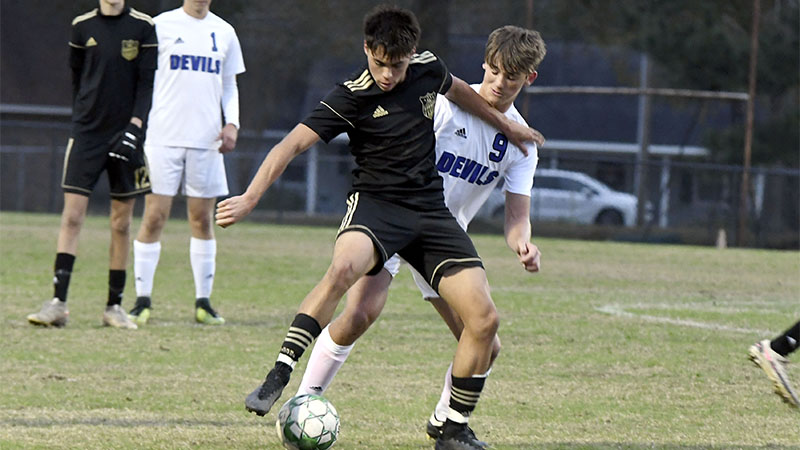 Closed Down: Seth Santiago shields the ball from a defender during a Poplarville game. Santiago was one of the team’s seniors who played their final game against Greene County this week. Photo by Jonathan Mitchell.

Poplarville’s boys soccer season ended in heartbreak after a 1-0 loss to Greene County Tuesday, dashing the team’s hopes of making it into the playoffs.

It was a winner-take-all situation; if the Hornets defeated the Wildcats, Poplarville would’ve qualified for a first round playoff match.

However, the loss closed Poplaville’s schedule, which was filled with the normal adversity that comes with every season compounded by a pandemic.

“We had a stretch, really the entire year, where we didn’t have a full deck to play with. We were always missing someone, somebody had to fill another role and we had some young players step up,” Head Coach Luke Gipson said.

The defeat was heartbreaking for the Poplarville athletes, but Gipson said there’s more to soccer than just wins and losses. High school sports is as much about on the field action as it is about off the field lessons.

Poplarville has gotten used to making the playoffs, so missing out hurts, but there were still plenty of positives to take away from this one of a kind season.

“As a program we preach that we’re building leaders for others so that they’re a successful worker, husband, father and I feel good about this class leaving and what they’ll do in the future,” Gipson said.

Players were in and out of training and the starting line up all season as the Hornets dealt with injuries and athletes in quarantine.

The constant rotation of athletes meant everyone had to be prepared, ready to play in different positions and willing to take on roles they wouldn’t have expected to have at the beginning of the season.

“I think, for players and coaches, it created a stronger level of trust and a closer relationship. I think we’ll see benefits next year as far as the atmosphere and the feelings towards one another (will continue to) improve. Because sometimes it can get hostile with high expectations,” Gipson said.

Gipson said his younger players caught on and worked to emulate that behavior of the team’s veterans knowing it will benefit the team.

“I think the younger guys really paid attention and noticed these seniors are stepping it up because they can see the end in sight, so the young guys said, ‘I’m going to care now before it’s the last month of my senior year.’ I think they matured in that way and I don’t think they’d see that if we didn’t go through a pandemic,” Gipson said.

The season may have just ended, but the athletes are only going to get a couple days off before it’s back to the grind.

COVID-19 cut short the team’s post-season workouts and training sessions last year, while also inhibiting the squad’s ability to play games or train over the summer.

Gipson intends to make the most of that time this offseason in hopes that 2022 will see the Hornets back in the playoffs.

“We’re fueling up and getting back to work. I’m fired up and have a bad taste in my mouth from (the Greene County loss). I’m exited we don’t have to miss any of (the spring or summer workouts) and we’re going to work right away,” Gipson said.