Poplarville basketball teams back in action 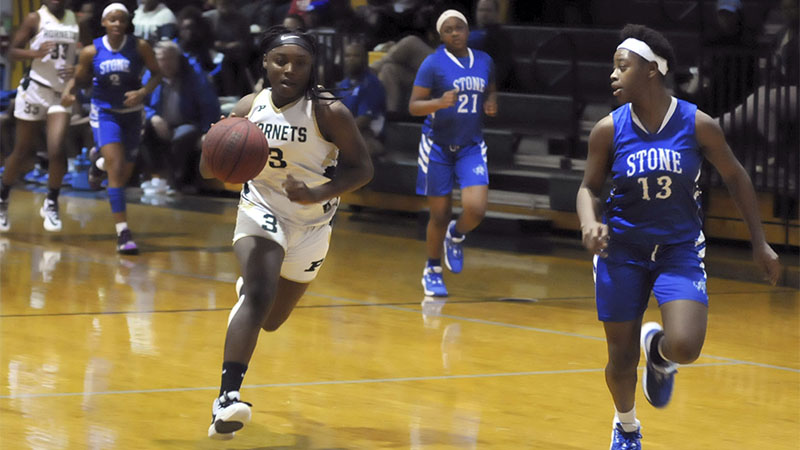 The Poplarville and Stone County basketball teams faced off Monday evening in a district battle that saw Stone County come away with two wins.

Poplarville went 7-26 at the free throw line, so if a few more had fallen the game would’ve ended in favor of the Lady Hornets.

However, there were some positives to draw from the performance, including three players reaching double digits in scoring.

Tytiana Buckley led the team with 22 points while pulling down 7 rebounds.

Deanna Freeman and Nashanti Tillman both had 10 points for the Lady Hornets while Freeman also had 8 boards on the night.

Spreading the wealth and having multiple scorers in double digits is beneficial for any team, and it was a point of emphasis for the Hornets against Stone County.

“I needed more people to score in the second half because I knew they’d come out and put more pressure on (Buckley). I just told a couple of other players we needed to pull points out of them. We needed to have more shots out of them, more inside presence. They made those adjustments and that was why we were really able to get more points,” Jeffries said.

Competing in a close game has been a theme for the Lady Hornets this season.

Jeffries said her players need to get used to that pressure and learn how to execute in those situations because the rest of the season will have more of the same.

“We’re in this cycle of playing with all the teams in the district and we’re all so close in ability. It’s going to be like this for the rest of time. Everything we do has to be with a purpose, from the beginning of the game to the end of the game,” Jeffries said.

Poplarville lost to Stone County 67-35 in Monday’s district match up in what was the team’s first game back since Christmas break.

Riley Josey had a double-double for the Hornets, recording 10 points and 14 rebounds.

Head Coach Run Bowen has had several weeks to get his team acclimated to this year’s new systems, which included an influx of players who joined the team midseason after completing a season with the football team.

The process of educating those players and getting them in game shape takes time, but Bowen said at this point the players have the knowledge they need.

“We went through the walk through and installment part of it. Now they just have to play harder at it and that’s the problem we’re having right now is we’re just not playing hard and that falls back on me. I have to get them ready to play hard and make them play hard,” Bowen said. The team is now preparing for another district match up, this time against the Purvis Tornadoes on Jan. 8.

Usually the players would be focusing on strategies, offensively and defensively, the Tornadoes use in order to try and gain an edge.

However, Bowen said there are more pressing issues the team needs to take care of before Friday’s game.

“Right now there’s a more urgent issue at hand and that’s just effort and getting the kids to play hard. That’s what we’re going to focus on going into the Purvis game. We’re not going to worry about what they do, we’ll just try to maximize effort,” Bowen said.

The match up against Purvis will take the Hornets on the road with the girls starting at 6 p.m. and the boys starting at 7:30 p.m.