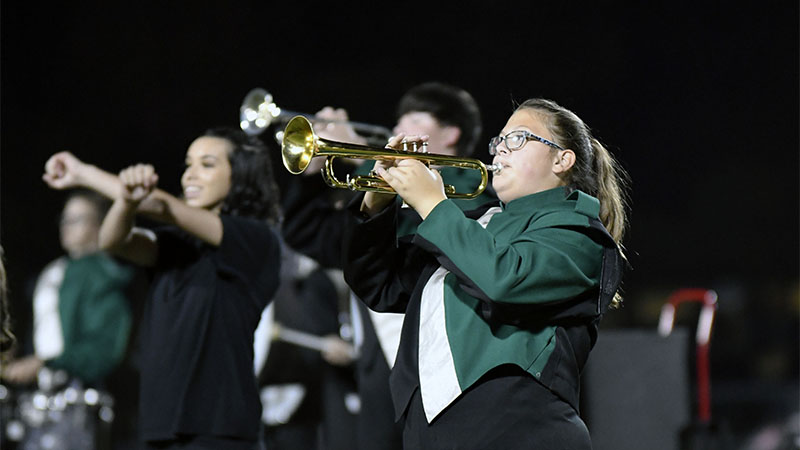 The Poplarville band didn’t get to participate in competitions this past semester because of COVID-19, but the musicians didn’t let the circumstances bring them down.

Band Director Ken White said his musicians kept their heads up and continued working while dealing with new protocols and restrictions.

“One thing I did like was that their (music) reading skills shot up. We were able to play more stand tunes than I normally would and I was able to throw some challenging music at them,” White said.

Not only were the musicians hard at work, but they enjoyed the challenge.

Following the early closure of schools last spring, the band knew this year would be a little different.

Dealing with a pandemic is a new experience for everyone, but White said his performers were able to stay positive and keep moving forward.

“I thought they were in great spirits. These are very mature kids and they knew because of the COVID-19 circumstances they weren’t allowed to do a lot of things, but it didn’t hold them down. I was very impressed with how their attitudes were towards everything,” White said.

Heading into the spring semester there’s still plenty of uncertainty, including whether or not the band will be able to participate in their usual concert season competition.

Not only that, but new challenges are upcoming as the band switches from outdoor rehearsals and performances to indoor events.

“We’re about to go through some trickier things. There will be a few more challenges as far as keeping everybody spread out while still getting that concert ensemble sound. We’ll try to keep a normal feel. We’ll try to do after school rehearsals as a sectional type of thing instead of having the whole band. Then we’ll be able to spread out more and work with individuals instead of the overall ensemble,” White said.

Concert performances place an even greater emphasis on the details and nuances of specific pieces of music.

Standards and expectations are higher because the musicians won’t be outside dealing with the elements, or marching, during a performance.

Even with the increased pressure and attention to detail required, White is hoping his musicians carry the same mindset into 2021.

“I would just like them to continue with their attitudes from this past semester. I’ve never met students that have acted so professional.”

“Anything I asked of them or required them to do they did, even in a difficult situation. They could’ve said, ‘Oh we shouldn’t have to do this because of COVID-19.’ But they said they wanted to get something accomplished,” White said.