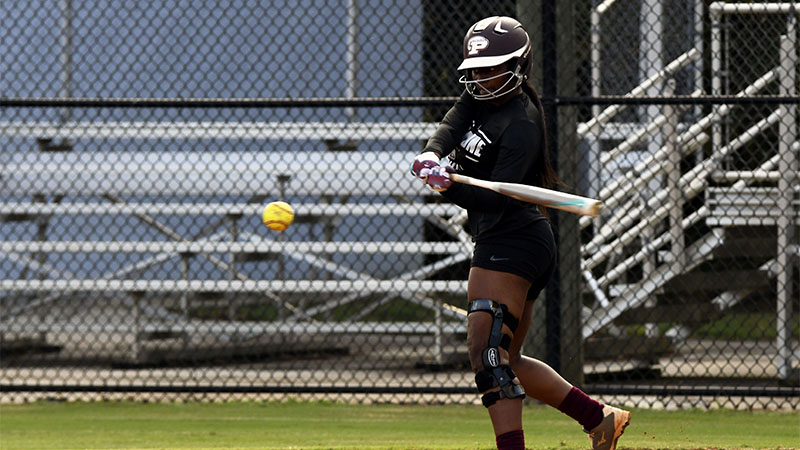 No Limits: Picayune's softball practices will up the intensity and go longer now that there are no restrictions on the team's practice hours. Photo by Jonathan Mitchell.

The Lady Maroon Tide softball team has started full-fledged practices, enabling the team to work late into the evening without being limited by restrictions.

Previously the team only had enough time to prioritize one or two topics during each practice before having to leave the field.

However, now that the season is in session and there aren’t any limits, the Lady Maroon Tide can combine all of the basics they’d been working on into cohesive, long lasting practices.

“Before we started full out I know there were a couple days where we’d focus on first and third plays and bunt coverages. Another day we worked on cutoffs and rundowns. Now you have more time where you can combine all of that together. You need to be able to put it all together in one practice,” Head Coach Courtney Dickens said.

The team is preparing for this season after last year’s was cancelled due to the COVID-19 pandemic. There are a variety of new protocols that have been implemented in order to keep the athletes safe, and the Mississippi High School Activities Association has released COVID-19 guidelines for spring sports.

One of the recommendations involves programs having enough equipment so there will be little to no sharing of equipment between players.

This means the Lady Maroon Tide has had to buy helmets for all of its junior varsity and varsity players, individual water bottles for the athletes and multiple sets of catching gear so players don’t have to share.

The new set of expenses isn’t a normal outlay for the Lady Maroon Tide, but the community has rallied around the program by donating money to help fund the new purchases. “We’ve had to make some adjustments because that’s money we usually don’t spend, but our community is coming together to help out. I really appreciate that. That has really helped us out,” Dickens said.

The start of competition is just over two weeks away with Picayune scheduled to take part in a jamboree on Feb. 13.

There’s still plenty of work to do in between now and the start of the season, but the team’s overall experience and large number of veteran players should make the preparation process go smoothly.

“We do have a good many juniors and seniors so there’s things I do expect them to know, and we should not have to spend as much time on (certain fundamentals) as we did before. There’s things we used to spend a lot of time on and now we’re able to get through it faster. That part of having an older team helps,” Dickens said.