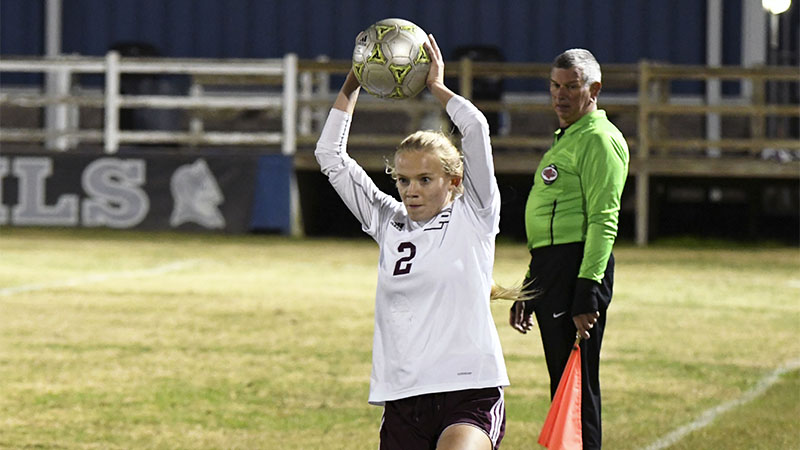 Throw In: Senior Destiny Hannah looks for an open teammate during a Lady Maroon Tide game. Photo by Jonathan Mitchell.

Picayune’s soccer teams ended their regular seasons last week against Hancock after both of the Maroon Tide’s teams lost to the Hawks.

The Maroon Tide lost 6-0 against the Hawks with Picayune fielding a team made up of mostly junior varsity players.

Picayune had already sealed a playoff spot before the Hancock game, and seeing as the Hawks aren’t a district opponent, the result of the match wasn’t going to affect seeding.

Head Coach Britton Fortenberry instead decided to rest his starters to not only avoid the possibility of someone picking up an injury, but also so his players will be fresh and ready to play for their first round match.

The Maroon Tide will travel to take on Forest Hill on Jan. 27 for the team’s playoff game.

In preparation for the match, Fortenberry said a major point of focus for the team will be set pieces.

Being able to both attack and defend from dead ball situations may end up being the difference in the game, so Fortenberry wants to make sure those details are covered.

The team will also have several players returning from injury for the first round game, so there will be a period of transition as the athletes get back in the line up.

“Because we have kids coming back off injury we’ll start working them back into our formation and tactics. We’ll have to go through a few things, but they’ve done it before. The learning curve won’t be huge. It’ll just be us getting everyone acclimated to what we’re doing,” Fortenberry said.

The team has numerous seniors on the squad along with several starters who were part of last year’s playoff team.

There’s plenty of experience throughout the team, a fact Fortenberry said will come in handy as his squad prepares for Forest Hill.

“It’s huge having kids as experienced as I have. The older guys are coming in and they’re ultra focused on the task at hand. They’ve been helping bring the younger guys along and keeping them focused,” Fortenberry said.

The Lady Maroon Tide lost 6-0 in what was the team’s final game of the season having been eliminated from playoff contention earlier in the year.

Assistant Coach Brandon Butler said the team played well, and that after the game he made sure to congratulate the team on making it through a season like no other.

“I told them, ‘You guys have faced adversity and overcame it in more ways than one. Don’t listen to naysayers, you were all playing day in day out.’ The girls put in a lot of effort,” Butler said.

The team was young and inexperienced, with only two seniors in the squad.

That means the majority of the team will be returning for next season after getting plenty of experience this year.

Butler said the program should see an uptick in results next year considering the minutes so many young players were able to get this season.

“We have a lot of players who are in leadership roles that have a lot of experience so next year we should be able to have a solid run on district. We’ll continue to improve and accelerate our process. We’re on a great path and I can see us (continuing to) head that way,” Butler said.