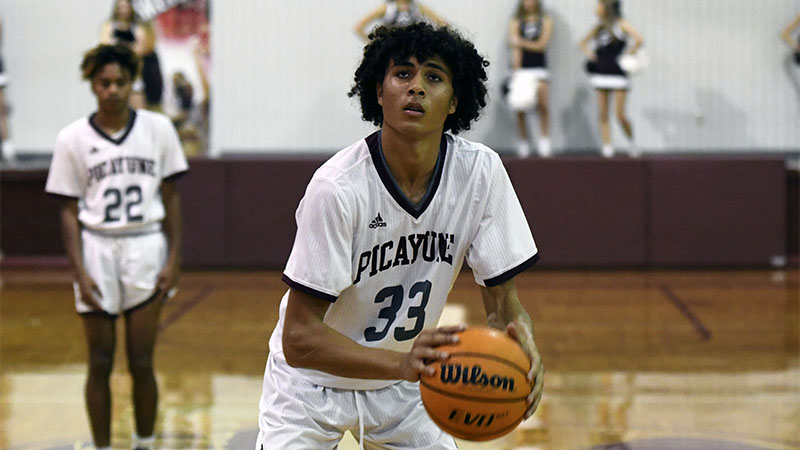 Easy Points: Isaac Brice stays focused while at the free throw line during a recent game. Photo by Jonathan Mitchell.

Josh Holmes and Isaac Brice both had 12 points, while Seth Stockstill added another 9 points for the Maroon Tide.

It was a dominant performance from Picayune, but the game didn’t take place against a district opponent so it has no effect on the team’s standing.

However, the lopsided win served as another opportunity for the team to grow and work out some on the floor issues before getting back into district play.

“I think we were able to create some stops, and some of our guys were able to make some plays and make those shots from the three point line. We played at a better tempo and sped the game up,” Vianney said.

Chief among the team’s improvements against Bay High was defensive intensity.

The Maroon Tide pressured the Tigers all night long, and the hard work defensively paid off on the other end of the court.

“We were trying to pick up those guys and get pressure on the ball, and we did well. That also created some opportunities for wide-open layups,” Vianney said.

Vianney was able to get deep into his bench thanks to the team’s large lead over the Tigers.

In the midst of a season where a player having to quarantine is a possibility, building depth is a must for the Maroon Tide.

“With that type of game it was an opportunity to reach into the bench and give some experience to younger guys so they can get in there and see how it feels,” Vianney said.

The season is starting to wind down with only a few more games to play before the district tournament begins.

At this point of the year, teams want to be playing their best basketball and Vianney said his team is reaching for that top level of play.

“There’s no perfect game, but at this point of the year you want to make fewer and fewer mistakes. You’re looking for an opportunity to stay in longer and extend the season, so you really have to keep playing and be consistent at doing those little things (right),” Vianney said.

Picayune putting up 66 points on Bay High is no small feat, but it’s the hard work on the defensive end that might help the Maroon Tide find the consistency Vianney wants.

“We just have to try to be consistent, especially on defense controlling the ball, stopping penetration, having a good contest. That’s what we need to pay attention to,” Vianney said.