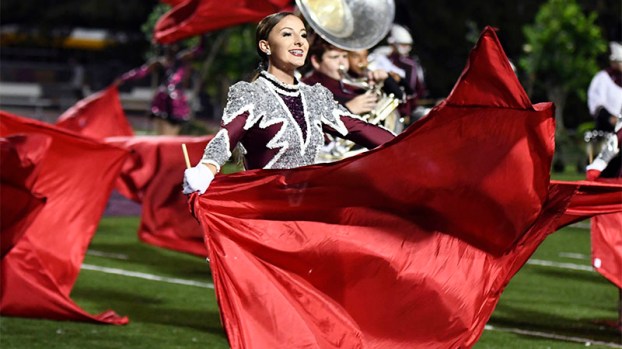 On The Field: Not only does the Pride of the Tide perform at competitions, but the team is also part of Picayune's halftime show that takes place during football games. Photo by Jonathan Mitchell.

The Picayune Pride of the Tide was able to make the most out of the first semester in spite of the coronavirus pandemic by coming in third place in the large varsity pom and varsity kick categories at the 2020 state competition on Dec. 11.

To prepare for state, the team took part in a smaller competition on the campus of Pearl River Community College.

Assistant Pride of the Tide Director and Choreographer Abby Montgomery said the contest at PRCC helped give the dancers a chance to compete and provided an opportunity to fix any issues found by the judges at the local competition.

“That was good preparation for state. They could get used to performing and being in front of a crowd. Then the next week we hit the ground running working on the judges’ critiques from that competition,” Montgomery said.

The state competition was a different experience for the team as there were numerous COVID-19 protocols in place to keep the dancers safe.

Several squads didn’t get to compete due to quarantine, so the chance to perform on its own was a reward for the Pride of the Tide after dealing with the unusual circumstances of this year. “When it was all said and done we kind of got emotional on the way home because they did it and they did amazing. They did more than we could’ve ever asked. Even with all the things we had to dodge and work around, they ended up doing amazing with all of it,” Montgomery said.

The dancers had to learn on the fly this year as the team dealt with COVID-19 restrictions and protocols that affected everyday life.

There were times when the team was missing dancers who were out on quarantine, and things like wearing a mask became commonplace.

Montgomery said the reason for the team’s success this year came down to the dancers being able to adapt and do whatever was necessary to continue improving.

“We have been so blessed with this team that has been so flexible and their attitudes have been so positive through it all. It’s easy to get aggravated and not want to do it because things were weird, but they weren’t like that. We were so thankful because the weird and difficult, they made it easy,” Montgomery said.

Competition season may be over, but that doesn’t mean the Pride of the Tide doesn’t have plans for 2021.

If plans hold, the team intends on hosting a camp for younger children to come and work with the dancers on Jan. 23, the Saturday before the Pride Extravaganza show.

Following the camp, show and team banquet things will wrap up for the team.

It’s been an unusual year, but Montgomery said the pandemic brought with it plenty of lessons that will be used for years to come.

“With it being such an unknown and different year we had to tread through unforeseen waters that we would not normally have to. For us as directors, it’s been really good for us to work together and figure out how things need to work, what we need to change. While it has been challenging, it has been a blessing in teaching us how to tread through those unforeseen waters and how to go into the unknown,” Montgomery said.

Poplarville athlete holds on to memories made

Janna Peterson plays softball and volleyball for the Poplarville Lady Hornets while also supporting the football team from the sideline... read more