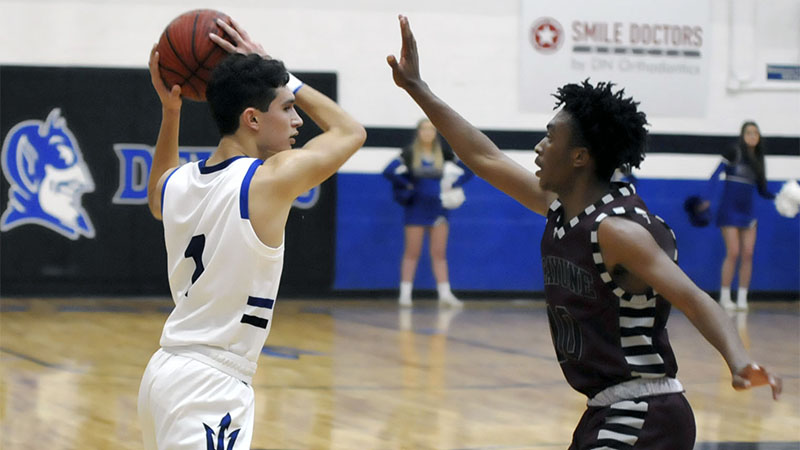 Getting Ready: Picayune's basketball team competed in a tournament over the holiday break in preparation for district play, which includes a game against PRC Jan. 8. File photo by Jonathan Mitchell.

First up on Dec. 28 was a talented Meridian team. Head Coach Eric Vianney said his players did a good job of fighting from behind and almost pulled out the victory, but ended up losing 48-43.

Then on Dec. 29 the Maroon Tide bounced back with a close victory over the Moss Point Tigers 52-50.

After a slow start, Picayune was able to come back once again from a deficit and earn its first win of the tournament.

Derai Jones had 15 points against Moss Point, Stockstill had 13 points and Holmes had nine points.

The final game took place on Dec. 30 against West Harrison and the Maroon Tide won that game handily 54-39.

Two wins in three days was a step in the right direction for Picayune. Vianney said his players were ready to give it their all during the Christmas break games.

“I think overall I want to say I was very pleased with our effort. I think our guys competed.”

“They played hard. We didn’t always play smart, but there are no perfect games in basketball. It’s rare,” Vianney said.

Being able to overcome a deficit is a helpful skill for any team to have, but especially so in such a fast paced, momentum based sport like basketball.

However, Vianney said his team being behind was in large part due to slow starts, which is something the Maroon Tide can’t afford when it takes on the Hattiesburg Tigers Jan. 5 in an important district game.

However, the holiday tournament victories may serve the team well heading into the Hattiesburg match up.

“My hope is we learned something, we discovered something about ourselves. We preach it all the time, no matter the score you have to play hard. Hopefully we created some momentum from that tournament that we can carry over to our district games. This is precious and fragile, and you have to preserve it. You have to fight hard to keep it, you have to stay humble and you have to want it,” Vianney said.

Playing on Hattiesburg’s home court will present a challenge, especially because district seeding will be impacted by the result of the game.

If Picayune defeats the Tigers, the team will be in a strong position heading into a Jan. 8 match up against county rival Pearl River Central.

“We’re going out there and it’s tough to win in Hattiesburg, but we accept the challenge and we’ll see how it goes. If you want to be great you have to go play very good teams,” Vianney said.