Picayune baseball staying ahead of the curve 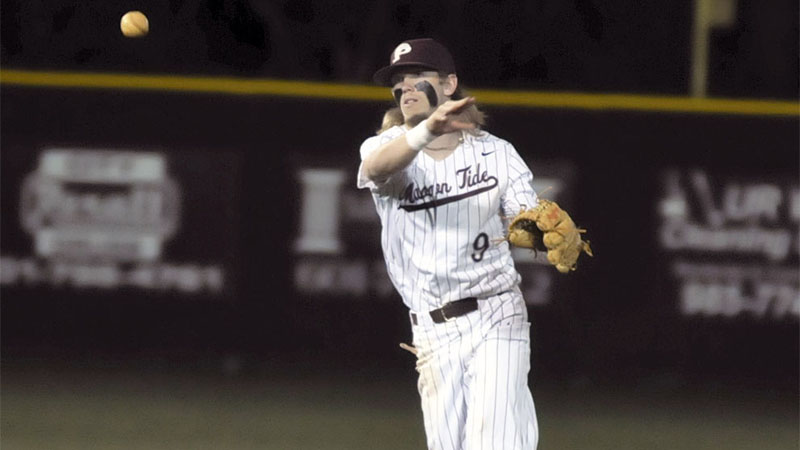 Infield: Austin Samples throws a grounder back to first base. File photo by Jonathan Mitchell.

Picayune’s Maroon Tide baseball team has been practicing since mid-summer and has used the early head start to get its young players ready for varsity baseball.

The start of the season is barely more than two weeks away with Picayune set to play Biloxi in a jamboree on Feb. 13.

There are no longer any restrictions on the amount of time Picayune can spend practicing, so the athletes are making the most of these last couple of weeks.

“The young guys we’ve got have really jumped on board. Our seniors and older guys have set the example and I’m really proud of how our young guys have bought in and gotten after it so far. It’s been business as usual and the guys have shown up ready to work,” Head Coach Evan Nichelson said.

Not only did practicing over the summer give the athletes more time to get acclimated, but it also put Picayune ahead of schedule when it came to getting equipment.

The Mississippi High School Activities Association has implemented a plethora of COVID-19 protocols and regulations to keep athletes safe.

One new requirement has been that each athlete has his own gear in order to minimize the sharing of supplies.

For certain programs, this could mean having to spend a lot of money that would normally stay in the team’s account.

However, Picayune doesn’t have that issue.

The program was already in the habit of buying new catching gear each year, along with helmets and bats.

The Maroon Tide didn’t know it, but it was already adhering to the MHSAA’s guidelines before they were ever introduced.

“That wasn’t a big expense. The school has done a great job of providing all the things we need. I had a head start from the summer because a lot of schools didn’t practice during the summer, but we did so we had to buy (equipment) for these guidelines already,” Nichelson said.

Nichelson said the purchases didn’t affect the team’s budget since it’s been a common practice for the program to buy new equipment each year anyway.

That’s made practices safer and run smoother, which is necessary with so many freshmen joining the squad.

The past couple of months have centered on getting the young players ready for the start of the season, which is approaching fast.

“We tell them what we expect. We’re the first ones to get on them and the first ones to encourage them and tell them they did something great. I told the team the other day, I don’t have time to wait for them to grow up. In my mind, we’re not rebuilding we’re restocking. That’s my mindset. It’s time to figure it out and let’s go, and they’ve done a good job of that,” Nichelson said.

Having a senior heavy squad last season means Nichelson has a lot of holes to fill in the starting line up.

Evaluation will continue even after the season begins, but right now the goal is finding the right personnel that fits Picayune’s goals and philosophy on the diamond.

“What I want to see is some guys come out and take some spots. There’s spots open all over the place, and just because you’re playing today doesn’t mean you’ll play the next game. They also need to buy into the team aspect of, ‘If I’m not in, I’m going to root for the guys who are in.’ It’s just about finding the best nine to give us the best chance to win,” Nichelson said.