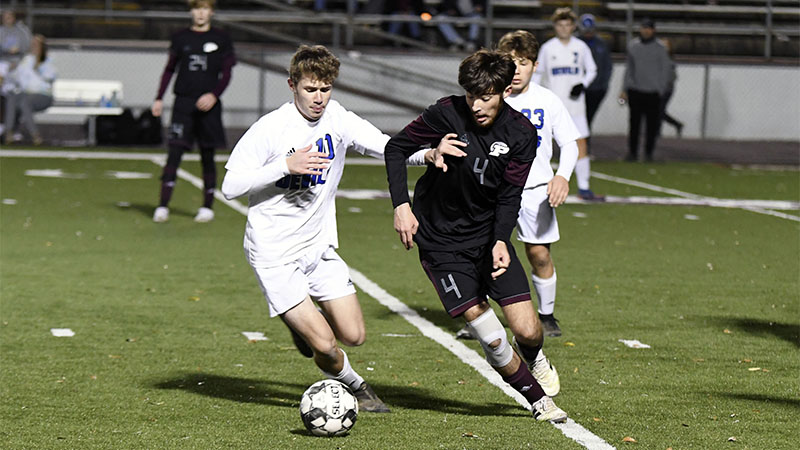 Rivals: A Picayune player and PRC player battle for possession of the ball in the middle of the pitch. Photo by Jonathan Mitchell.

The county rivals went back and forth all game, but Picayune created too many scoring chances in the final third for the Blue Devils to keep them all out of the net.

Vincent Acker started the scoring for the Maroon Tide with Danny Moore notching a brace for Picayune in the 3-0 win.

Victory over PRC led to Picayune sealing a playoff spot with just one district game remaining.

Picayune Head Coach Britton Fortenberry said his team did a good job of playing the game with the proper intensity knowing the playoffs were within reach.

“I was really proud of our effort and we really stressed that to them to come out and play hard. We always play hard against PRC, but especially when you have a trip to the playoffs on the line. I thought they did a good job of coming out, playing hard the whole game and they executed well,” Fortenberry said.

Things aren’t going to slow down for Picayune just because the Maroon Tide knows there will be a playoff match.

There’s still plenty of work to be done, especially as the team deals with players who are currently out due to injuries, which is forcing other athletes to play in unfamiliar positions.

PRC Head Coach Joe Weems said his team had several chances to score, but couldn’t capitalize against the Maroon Tide.

“I thought this was one of the better games they’d played in the last five games. We produced an enormous amount of opportunities. I don’t think they gave up and give Picayune credit, they played well,” Weems said.

The two evenly matched teams battled all night with PRC knowing a win would send them into the postseason.

In the end, a lone goal by senior Taylor Lancon was enough of a lead for the Lady Blue Devils to hang onto during the team’s 1-0 win.

The pressure was on for both teams as Picayune was also fighting to keep its postseason dreams alive.

Weem said his athletes handled the circumstances well given everything that was riding on the game, and against a county rival no less.

“I’m very proud of the girls, especially with the pressure they were under because we talked it up all week. It was a very emotional game for them and with what it meant for them they could’ve easily come out here and laid an egg but they didn’t,” Weems said.

Picayune Head Coach Ed Williams said the trials and emotions of the game may have gotten to his players.

However, even with the loss it still serves as a learning opportunity for the athletes.

“I don’t think you can ever teach a 17, 18-year-old to deal with that type of emotion and that’s why sports are so great is because it lets them experience those types of struggles.

Is it frustrating? Yes. Is it end of the world? No. Sports are cruel because if you make a mistake you pay for it, and sometimes life is as well. It’s a microcosm of everything that goes on,” Williams said.