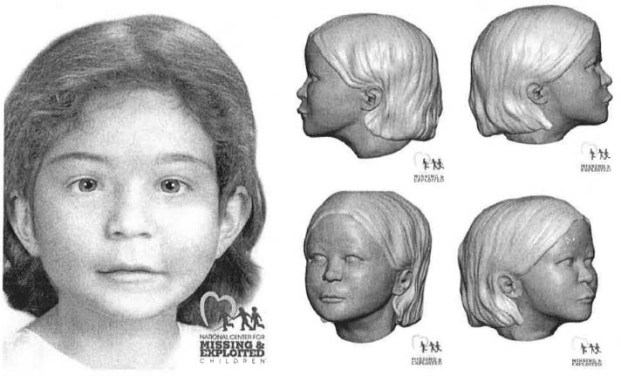 This composite sketch shows what the unidentified victim in a cold case in New Hampshire could have looked like. She is suspected to have relatives who currently or previously lived in Pearl River County. Submitted image

An unidentified child homicide victim in New Hampshire has possible relatives in Pearl River County.
According to a release from a New Hampshire law enforcement agency investigating the case states that on May 9, 2000 the remains of two juvenile females were found within a 55-gallon drum in a wooded area of New Hampshire. The remains were badly decomposed and are related to the case of an adult female and juvenile female, found within a 55-gallon drum in a nearby wooded area in 1985. The cause of death for all four females was ruled a homicide.
Although three out of four of the victims have been identified, the remaining juvenile victim has not. The New Hampshire State Police have partnered with a Genetic Genealogist – Dr. Barbara Rae-Venter, in efforts to identify the last victim. Examination of the genetic composition of the child and genealogy research, suggest the mother of the child has relatives in Pearl River County, Mississippi. Plausibly, the child and her mother could be descendants from Thomas ‘Deadhorse’ Mitchell born in 1836 or William Livings born in 1826. The unidentified child would be the 5X or 6X great grandchild of one of these men.
The child was 2 to 4 years old at the time of her death, placing her birthdate between 1975-1977. She had slightly wavy brown hair and stood approximately 3’3”-3’9″ tall. She had a slight overbite that may have been noticeable. An analysis of her bones suggest that she may have had anemia in life but this cannot be confirmed. DNA testing has also revealed she is primarily Caucasian with a small amount of Asian, Black and American Indian ancestry. No clothing or personal items were recovered with her. Jane Doe is estimated to have been killed during the late 1970s to early 1980s; most likely between 1979-1981.
The investigation has suggested she is not originally for New Hampshire, and likely only spent a few weeks or months in the New Hampshire region before her death. It is believed that Jane Doe’s mother’s relatives are most likely from Pearl River County, Mississippi, but no location is being ruled out at this point.
DNA testing has revealed Jane Doe’s biological father is Terrence “Terry” Peder Rasmussen. He went by many aliases, including Robert “Bob” Evans, Curtis Kimball, Jerry Gorman, Gordon Jenson and Larry Vanner. He is the primary suspect in Jane Doe’s death but died in 2010 before he could be questioned. Jane Doe’s biological mother is unknown and is feared to also be a victim of Rasmussen.
Rasmussen served in the US Navy between 1961 – July, 1967 and served a tour in Vietnam. Rasmussen frequented trailer parks, motels and campgrounds. He has worked as a laborer, electrician and handyman.
During the 1970s Rasmussen had many ties to Texas. He worked under one of his aliases on an oil rig in the Gulf of Mexico and possibly once resided in Galveston and Ingleside. By December 1979, Rasmussen was living in Manchester, NH with the alias Robert T. Evans.
Known aliases for the suspect include:
• Terry Peder Rasmussen
• Robert (Bob) T. Evans
• Curtis Mayo Kimball
• Jerry Edwards Gorman
• Gordon Curtis Jenson
• Lawrence William Vanner
The identities of the remaining victims found in Allenstown, NH, are Marlyse Honeychurch, Marie Vaughn and Sarah McWaters. They were last seen in La Puente California in November, 1978 with Terry Rasmussen. They have no known ties to Mississippi, and had no relationship to New Hampshire prior to them going missing.
The two ways the public can help is by sharing across social media expanding the reach of the information, and as comfortable, uploading their DNA into GEDmatch or Family Tree DNA to increase the chances of identifying this little girl. Even if people don’t think they are related, anyone originally from the Mississippi region, who allows for the DNA to be examined, could potentially assist with genealogy efforts.
If you are aware of a missing child or a missing child and mother from this time frame, please contact Major Marc Ogden of the Pearl River County Sheriff’s Office at 601-403-2542 or Sgt. Matthew Koehler of the NH State Police Major Crime Unit at (603) 223-3648 or matthew.koehler@dos.nh.gov.
A 20/20 broadcast featuring this case will be aired on ABC this Friday, at 8 p.m. Central.
For more on this story, click here.
You Might Like

Hope Roberts, Nissan of Picayune’s Teacher of the Week