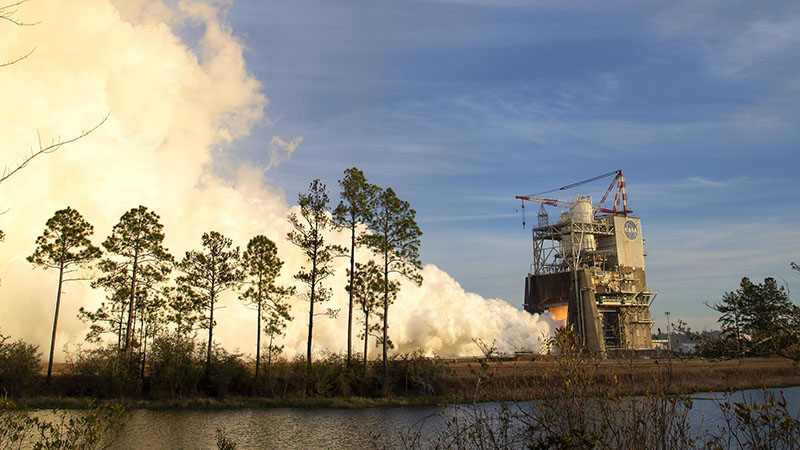 The test of RS-25 developmental engine No. 0528 on the A-1 Test Stand at Stennis Space Center near Bay St. Louis, Miss., marks the beginning of a seven-test series designed to provide valuable data to Aerojet Rocketdyne, lead contractor for SLS engines, as the company begins production of new RS-25 engines.

The new test series will evaluate the performance of engine components made with cutting-edge manufacturing technologies and techniques. The testing is part of NASA’s and Aerojet Rocketdyne’s effort to use advanced manufacturing methods to significantly reduce the cost and time needed to build new RS-25 engines.

For the Jan. 28 test, the RS-25 developmental engine was fired for a full duration of about eight-and-a-half minutes (500 seconds), the same amount of time the engines must fire to help send SLS to orbit. The engine was fired at 111% of its original space shuttle main engine design power and the same power level needed to help launch SLS on its missions.

The hot fire marks the first test on the historic stand since April 2019, when NASA concluded testing of RS-25 engines for the first four SLS missions. Since that time, Stennis teams have worked to complete major maintenance and upgrade projects to the A-1 Test Stand and its systems to ensure future test capabilities.

Among other projects, the work featured installation of a new NASA-designed-and-manufactured thrust vector control system on the test stand that allows operators to “gimbal” test RS-25 engines, moving them on a tight circular axis as must be done in flight to ensure proper trajectory.

NASA is building SLS as the world’s most powerful rocket. Initial SLS missions will fly to the Moon as part of NASA’s Artemis program, including the Artemis I uncrewed test flight this year that will pave the way for future flights with astronauts to explore the lunar surface and prepare for missions to Mars. RS-25 tests at Stennis are conducted by a combined team of NASA, Aerojet Rocketdyne and Syncom Space Services operators. Syncom Space Services is the prime contractor for Stennis facilities and operations.