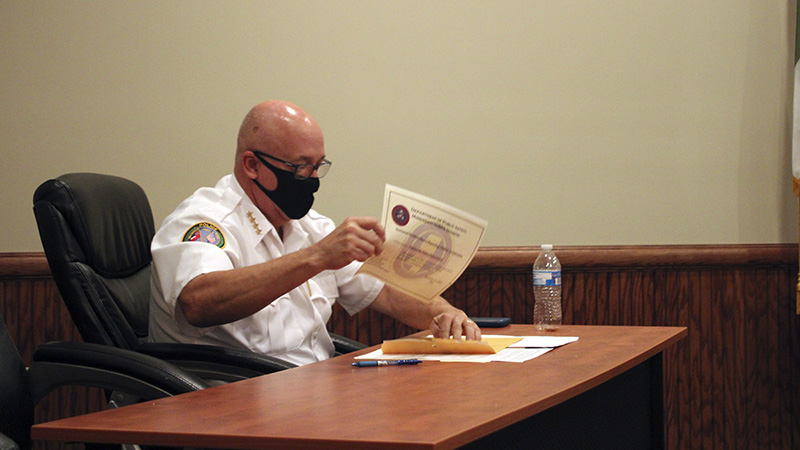 Poplarville Police Chief Danny Collier shows the Board of Aldermen the department’s NIBRS certification at their regular Board meeting Tuesday. Photo by Cathy Cook.

The Poplarville Board of Aldermen adjusted 35 additional water meter accounts due to meter misread errors, reducing residents’ accounts collectively by over $9,000. In December, the Board approved adjustments to eight other accounts.

The largest reduction made during Tuesday’s meeting was $1,450 for Mississippi Power Company, resulting in an adjusted balance of $82.39. Four other account adjustments were for over $500, but most were closer to $100.
The Board also approved eight water account adjustments at their last Board meeting in December. In the same meeting the Board terminated a Public Works Department employee due to the billing errors.

Public Works Superintendent Sam Hale said that he and another supervisor are carefully reviewing all water accounts to make sure anyone who was overcharged is credited.

The department is also looking for a new meter reader.

In a separate matter, Alderwoman Anne Smith said that she would like the Board to discuss ordinances related to green space and city planning to ensure the city stays aesthetically appealing with plenty of green space as it grows. Mayor Rossie Creel suggested she review the existing green space ordinance and come to the Board with specific changes she’d like to make. Alderwoman Shirley Wiltshire said that the existing ordinance is very specific.

In an unrelated matter, Smith expressed concern about the anticipated placement of 5G cell towers in the city. Alderman Daniel Brown said the state public service commission is the final arbiter of cell tower locations, not the Board of Aldermen.

—Appointed Michele L. Lewis as a municipal election commissioner to serve the rest of Janet Kennedy’s term, which ends in June.

The next Board meeting will be Tuesday, Jan. 19 at 5 p.m. in Poplarville’s City Hall.