Maroon Tide advances to the second round of playoffs 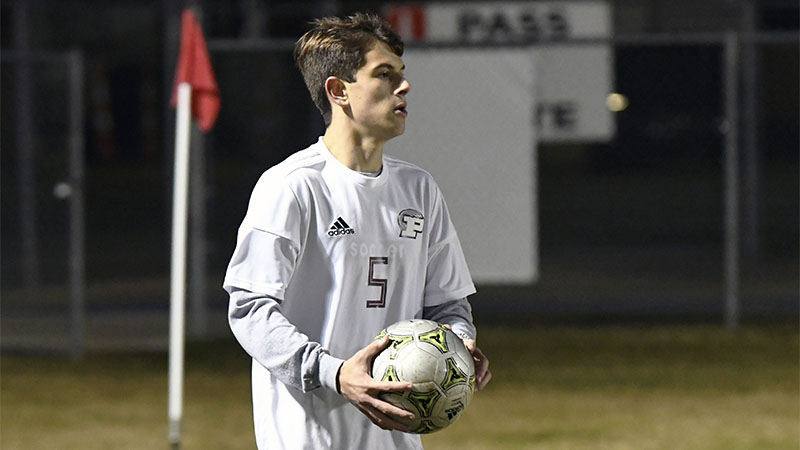 Throw In: Defender Braden Barone looks for an open teammate during a recent Picayune game. Photo by Jonathan Mitchell.

The Picayune Maroon Tide soccer team blanked the Forest Hill Patriots 3-0 Wednesday evening en route to the second round of the playoffs.

Danny Moore had a brace and Jamal Simmons also scored for Picayune.

There was a bit of an adjustment period to start the game as the players settled into a rhythm, but once the nerves were gone it was full steam ahead.

“Defensively we did an excellent job. We got two defenders back from injury and that definitely helped. In the final third we were dangerous all night. Early on we had good looks we missed, but then we got one in before just before the second half.”

“The guys played with great effort and made the adjustments they needed to make,” Head Coach Britton Fortenberry said.

Injuries have plagued the Maroon Tide all year, so having reinforcements in time for the playoff game was a boon for Picayune.

Fortenberry made some tactical changes while the athletes were out injured, but it didn’t take long for the veteran players to settle back into their roles after being off the pitch for so long.

“I thought they handled it well, which is a testament to the group of guys we have.”

“We didn’t really miss a step as far as tactics and where they needed to be defensively and attacking,” Fortenberry said.

Moore has been a constant threat for the Maroon Tide up top this year with goals in several key games.

The forward is naturally left footed, a unique attribute that helps keep defenders on their toes when trying to prevent a shot.

Fortenberry said Moore has put in the work over the past several years that is now paying off with a goal filled season.

“I’ve had him since his seventh grade year. When I first got him I knew the kid had something in him. Goal scorers have to have a certain mentality. They have to want the ball, want to score and get it for the team. He’s fearless in front of that goal. He’s had a hot hand and we’ve been feeding him,” Fortenberry said.

Picayune’s second round match up will be Jan. 30 at 5 p.m. against South Jones.

The match will take place on Picayune’s home turf after the two teams played to a scoreless draw earlier in the season.

Plenty has changed since the two squads last met, but nonetheless the familiarity between both teams will make strategizing a little more straightforward.

Now that the players have a playoff win to build off of, Fortenberry is hoping the nerves that hurt Picayune to start the game against Forest Hill won’t be an issue when South Jones comes to town.

“We’ve been preaching the last couple of weeks that we want to start fast, put pressure on teams, get an early goal and make them chase us.”

“Now that we have one game under our belt, we’ll hopefully have that confidence to come out early and put one in the back of the net and control the tempo of game.”

“We want to dictate how the game goes and throw the first punch,” Fortenberry said.

Poplarville’s season comes to an end with loss to…