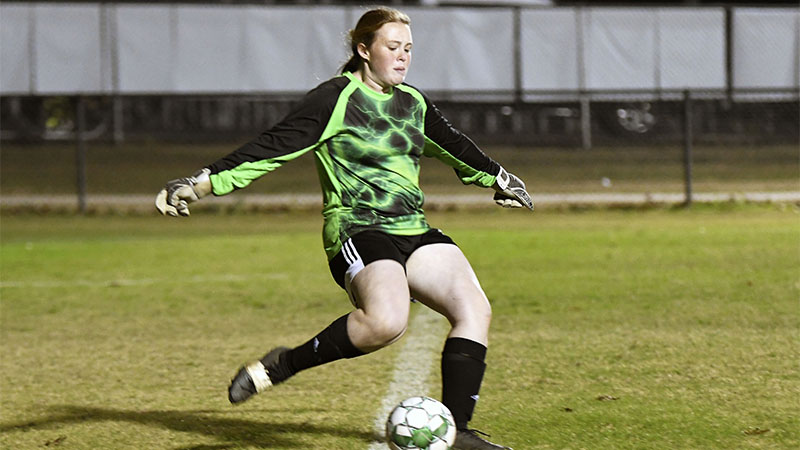 After being tied 1-1 at the end of regulation, it took two overtime periods and 11 penalty kicks before the Poplarville Hornets were able to defeat the Greene County Lady Wildcats Tuesday evening to earn another district win.

Addy Grace Alexander had the lone goal for the Lady Hornets, while Juliana Wells scored the final penalty kick to give Poplarville the win.

The victory put Poplarville at 7-1 in district play this season, good enough to earn a playoff spot and a first round match up against Sumrall on Jan. 26.

The team will now have a week to prepare for its postseason match.

Head Coach Beth McShea said getting that final win of the regular season could serve as a boost for the players as they get ready for Sumrall.

“I think it’ll be big that we came off with the win, even though it wasn’t a clean win. Winning on (penalty kicks), that was the first time this group has won an overtime game like that. I think that momentum (will help us),” McShea said.

Poplarville will have several training sessions before next week’s match.

Because the team is still dealing with injuries that put several players on the bench, the build up play from the Lady Hornets hasn’t been as clean as it was earlier in the season, so that’ll be an area of emphasis during preparation.

“We’ve been really sloppy with our passing, so we’re going to work on that a good bit. We’re just trying to find a rhythm offensively and get back defensively the way we were. We haven’t quite been ourselves since Christmas,” McShea said.

Sumrall and Poplarville met earlier this season in a match that saw the Lady Bobcats earn a close 2-1 victory.

Now the Lady Hornets will have a chance to exact revenge and move on to the next round of the playoffs.

“We actually had this exact same set up two years ago. Sumrall beat us in the regular season, then we had to go to them and play in the first round. For the most part, all of these kids have done this before,” McShea said.

There’s plenty of familiarity between the two opponents, which is a blessing and a curse.

Poplarville knows how Sumrall likes to play and can create counter strategies, but it’s the same case for the Lady Bobcats.

At the end of the day, there’s only so much preparation that can go into a game.

“I think it’s really hard to beat a good team twice in any season. I think having already played them once will help because we know what to expect and we have film. We know what we did wrong in the first game and what we did right, and it’s the same for them. It should be a tough, interesting game,” McShea said.