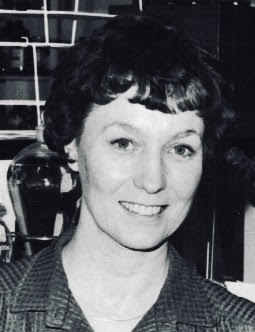 Irene Palmer DePalma, 85, died peacefully on January 1, 2021, in Winchester, MA, due to complications from metastatic breast cancer. She was a long-time resident of East Plainfield, NH.

She was born Phyllis Irene Palmer on December 15, in 1935 in La Junta, CO, daughter of Mary Agnes (Wells) and William Ellis Palmer. After earning a B.A. from Bob Jones University, she moved to Washington, DC, where she met John DePalma of East Plainfield, NH, while they both worked for the U.S. Naval Hydrographic Office in Suitland, MD. Their first big date was President Eisenhower’s Inaugural Ball in January 1957. They married on July 27, 1957. While raising three children, she taught at Panorama Elementary School in Hillcrest Heights, MD. After a move to Picayune, MS, Irene began a second career as an oceanographer with the U.S. Naval Ocean Research & Development Activity (NORDA). She took part in research expeditions in the North Atlantic, South Pacific, Caribbean, and Mediterranean, cruises in the Caribbean and the Mediterranean and the North Sea, studying ocean photosynthesis and bioluminescence. She was hired as a technician and in time worked her way up to being chief scientist on research cruises.

Irene was active in promoting women’s issues. In 1983, she served as Federal Women’s Program Manager for NORDA, working to increase the hiring and advancement of women in science. The president of FEW, a national organization dedicated to advancing opportunities for women employees of the Federal government. While working for NORDA, she earned a Master’s degree in biochemistry at the Univ. of Southern Mississippi.

After retiring with her husband to East Plainfield in 1991, she worked in the nursery at Kimball Union Academy. She was a member of First Baptist Church of Lebanon, and the Lebanon Women’s Club.

Irene loved liberal politics and was active in getting out the vote. In her later years, she enjoyed the company of her cat, Maxine (last in a long line of pets), tending her garden, her children and her grandchildren, not necessarily in that order.

She is survived by her children Susan, Michael and Steven, daughter-in-law Allison, grandsons Nicholas and Charlie, step-granddaughter Jazmine and daughter-in-law Hannah, along with numerous beloved cousins, nieces and nephews. (She had 98 first cousins.) Predeceased by her husband of 57 years, John. Also predeceased just in recent weeks by her brother William L. Palmer, 99, of Kingsport, TN, and her sister-in-law Margaret Tanguay, 98, of West Lebanon, NH.

Tributes can be made in her name to the restoration of First Baptist Church of Lebanon after its fire (lebfirstbaptist.com), or to the Upper Valley Humane Society (uvhs.org), or to any local food pantry.