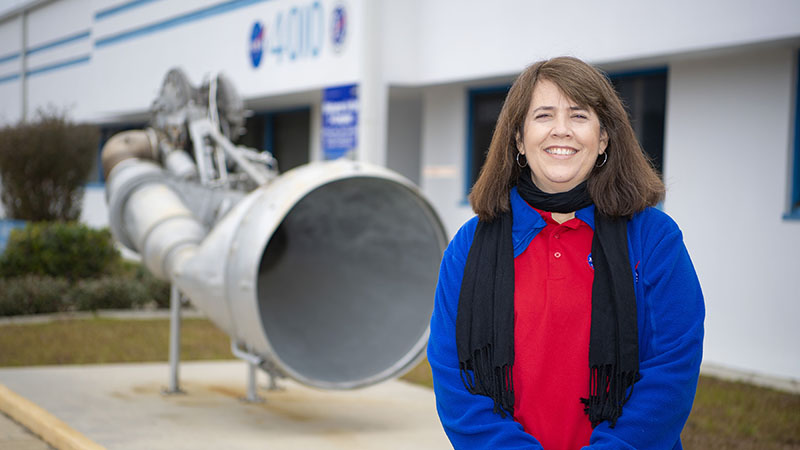 NASA engineer Christine Powell has found a home at Stennis Space Center, where she began work as a student intern 30 years ago. Stennis Public Relations photo

As far as Christine Powell is concerned, NASA’s Apollo Program and the original Star Wars movie changed everything for her.

“The image of a starscape is branded in my memory,” said Powell, as she reflected on the impact of the movie and NASA’s missions to the Moon.

“Space and the stars and exploring the universe became a huge part of my life growing up. Working for NASA or doing something related to space became my main goal.”

Powell took a major step toward achieving her goal in college when she was offered a chance to work at Stennis Space Center, near Bay St. Louis, Mississippi, through the Mississippi State University Co-Op Program.

Thirty years later, she remains at the site, serving as assistant director of the Stennis Engineering and Test Directorate.

For Powell, Stennis is home. A Biloxi native and Carriere resident, she is a lifelong member of the Gulf Coast family.

Her family heritage traces back to members of the exploration party that reached Mississippi with Pierre LeMoyne Sieur d’Iberville in 1699. In addition, with her years of subsequent work on site, Powell also has found a true place within the Stennis family.

In her current position, she leads the Project Formulation, Planning and Control Office and oversees staff functions for various site contracts and office areas. Powell also serves on several program- and agency-level teams and committees, leads efficiency and effectiveness initiatives for propulsion testing, and oversees the data, risk, and business management functions in the directorate.

The work involves direct support of NASA’s Artemis program to return humans, including the first woman, to the Moon.

Stennis is testing the engines and stages for the new Space Launch System (SLS) rocket that will serve as the backbone of the program and, eventually, fly to Mars.

For her part, Powell works to help maximize limited resources, serves on the operational readiness committee for SLS core stage testing, supports agency teams as they evaluate mission concepts and strategies, and serves as a spokesperson to community, student, and industry groups to promote NASA and its Artemis and mission goals.

The work has its challenges, especially as COVID-19 has impacted operations.

“It has been challenging to find a way to maintain relationships, communication, and morale in a ‘virtual’ world,” Powell said. “I have been very impressed by our center leadership in the proactive approaches to engage employees and find solutions in enabling onsite operations.”

The leadership and resilience of the center comes as no surprise. For Powell, it is a direct reflection of the commitment and creativity of the Stennis workforce.

“Our workforce is our biggest asset, and I am proud to be a part of this organization, particularly at this time,” she said. “Stennis is one of the most engaging and energetic cultures I have seen. Personnel work hard but make time to take care of each other. We respect differences and encourage workforce diversity to ensure we are exposed to new ideas, different perspectives, and different approaches to solving problems.”

Powell looks back at her continuing career with pride – at being able to help small companies reach testing goals, assist colleagues, and mentor employees.

“It all makes me feel like I am doing my part in helping NASA and the programs succeed,” said Powell, who has received a host of achievement awards for her work.

Looking ahead, Powell is excited to see where new technologies, test projects, and missions lead NASA and the center.

As for herself, she knows exactly where the roads goes – home, where she belongs and has been all along.