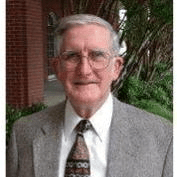 Dr. Holcomb was born on February 2, 1933 in San Antonio, Texas to Daniel Charles and Vida Ora Holcomb. A 1952 graduate of Petal High School, Dr. Holcomb would go on to earn degrees at Mississippi College, the University of Southern Mississippi, New Orleans Baptist Theological Seminary and Southern Baptist Theological Seminary. He married Olga (Hagler) Holcomb in 1956 and together they had two sons, John Daniel and James David. Dan and Olga were married for 59 years.

Holcomb received his doctorate in church history and taught religion at the college and seminary levels for more than 50 years. From 1969-79, he was a professor and chair of the religion department at Oklahoma Baptist University. In 1979, Holcomb began a 40 year career with New Orleans Baptist Theological Seminary where he served as chair of the division of theological and historical studies and held the John T. Westbrook Chair of Church History.

An ordained Baptist minister, Holcomb began an active preaching ministry at the age of 15 and later continued as a supply and interim pastor. Dr. Holcomb was a devoted husband and loving father. A sports enthusiast, Holcomb coached his sons’ youth basketball teams, served as the PA announcer at O.B.U. basketball games and was an avid fan of the New Orleans Saints and New Orleans Pelicans.

Dr. Holcomb was preceded in death by his parents, his wife, Olga, and a granddaughter, Allison. He is survived by his sons, John of Bixby, Oklahoma, and David of Belton, Texas; daughters-in-law, Jeanna and Carol; and five grandchildren.