County rivals fight for playoff positioning on the pitch 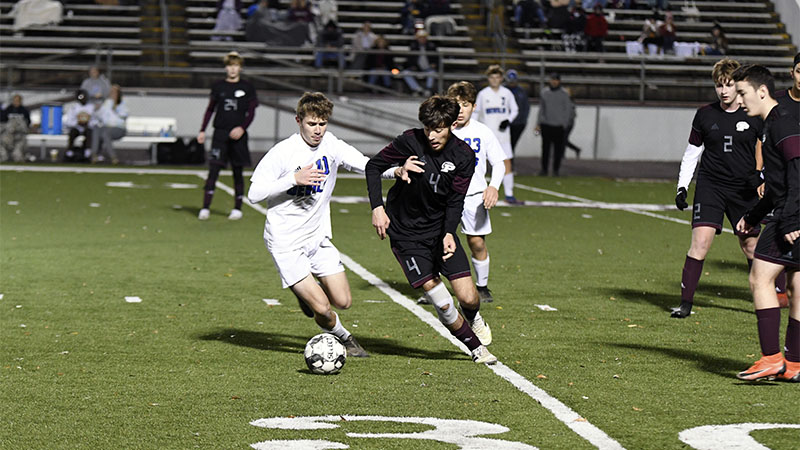 Rivals: A Picayune player and PRC player battle for possession of the ball in the middle of the pitch. Photo by Jonathan Mitchell.

Picayune and PRC faced off tonight in a battle of county rivals with postseason positions on the line.

The Lady Blue Devils and Lady Maroon Tide went back and forth all game with both sides creating numerous scoring opportunities.

However, it was the Lady Blue Devils who won 1-0 thanks to a goal from Taylor Lancon.

PRC Head Coach Joe Weems said he was happy with how his players executed the team’s game plan.

“They played like we wanted them to. They were able to disrupt everything at Picayune’s point of attack. We made a lot of good plays. I’m very proud of the girls, especially with the pressure they were under,” Weems said.

The win clinched a playoff spot for the Lady Blue Devils.

The boys teams then took the field for the second game of the night.

Picayune created a lot of chances attacking the third of the field and capitalized on those opportunities.

Forward Danny Moore had a brace and Vincent Acker started the scoring with a goal of his own as the Maroon Tide won 3-0.

The victory means Picayune will be going to the playoffs again after making an appearance last season.

Picayune Head Coach Britton Fortenberry said he was happy with his team’s work ethic against the county rival PRC.

“I was really proud of our effort. We really stressed the need to come out and play hard. We always play hard against PRC, but especially so when you have a trip to the playoffs on the line,” Fortenberry said.