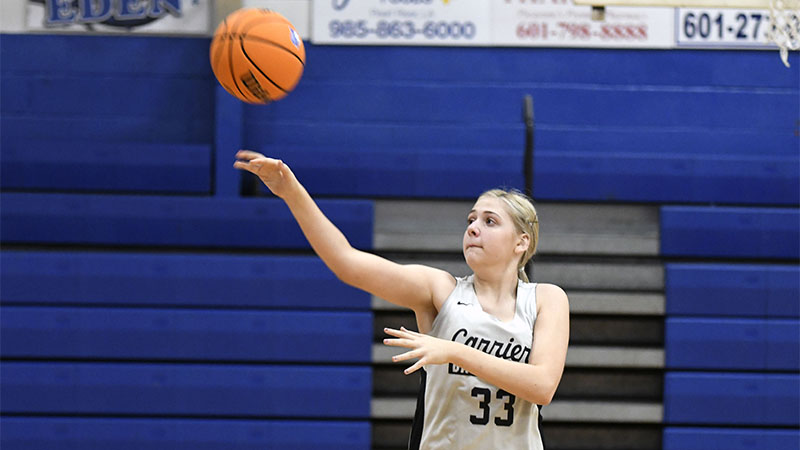 Practice Makes Perfect: PRC's Lady Blue Devil basketball players have had to hone their skills in practice after several recent games were cancelled due to opponents going into quarantine. Photo by Jonathan Mitchell.

PRC was scheduled to play a game Dec. 29 and Jan. 4, but both games had to be cancelled after those opponents were forced to go into quarantine.

The team’s last game was against Poplarville on Dec. 15. Head Coach Cliff Bauer said the long lay off between games has led to practices taking on a more competitive atmosphere.

“Unless we pick up a game it will be about three weeks between games, so that’s been our focus is to keep it as game like as possible in practices. The practices have tried to focus on conditioning a lot and doing as much as we can at game speed,” Bauer said.

Certain things can be replicated in a non-competitive environment like specific strategies and plays the team uses.

However, the pace of play in competitive matchups, along with the quick thinking required for players to be successful, can’t truly be recreated without an opponent.

“I think the big part of playing games is that not only does it come with conditioning, but also decision making, and that’s what you can’t really replicate in practice. We can get after it and run hard, but I think the big thing with games is the mental processing and decision-making. That can only come when playing real, live games,” Bauer said.

The reduction of non-district games will limit young players from getting time on the floor in competitive games without the pressure of a district matchup.

Combined with the team’s own two week quarantine, those opportunities have been few and far between for the Lady Blue Devils’ younger players this season.

“For some of the seasoned players it’s not as big of a deal, but it affects us now and next year as well for the really young players. But with that being said, everybody is facing the same situation we are. I’m just anxious to see how district is going to be,” Bauer said.

PRC is still trying to find an opponent for Jan. 4, but if that doesn’t work out then the first game back for the Lady Blue Devils after the holidays will be against county rival Picayune Jan. 8.

The district game will put seeding positions on the line, so Bauer is hoping he sees the necessary effort from his players to beat the Maroon Tide, even if the team hasn’t played in nearly a month.

“I guess I want to see my team just play hard and generally we do. I think if we play hard we’ll put ourselves in a position to win against Picayune, even if we don’t play (before then),” Bauer said.

The match up with the Maroon Tide will start at 6 p.m. and Picayune will have home court advantage.