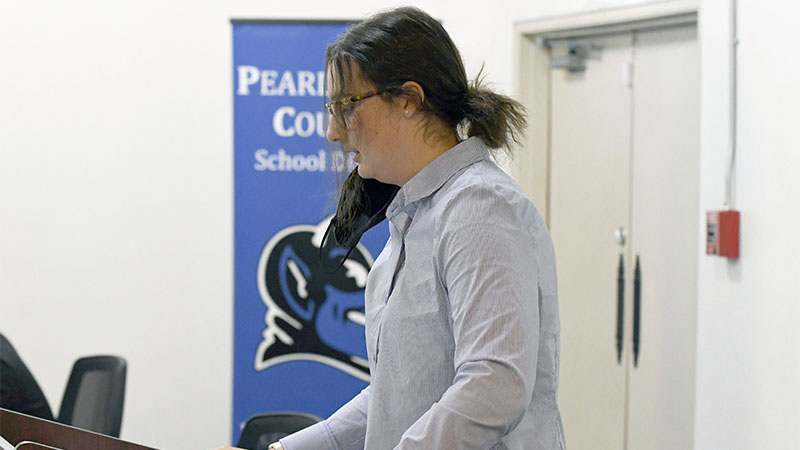 Student Report: Student School Board Representative Sophia Albasini gives her report regarding student activities taking place throughout the district during the past month. Photo by Jonathan Mitchell.

During Thursday’s meeting, Pearl River School District’s Board of Trustees discussed distribution of new Chromebooks and the district’s plans for coming back after Christmas break.

Following the approval of financial reports and the Board’s minutes, Superintendent Alan Lumpkin brought up the distribution of Chromebooks during his report and had PRCSD Director of Technology Tara White update the Board on how the process is going.

The district’s lease of current Chromebooks was set to expire following the end of this school year, so PRCSD used the funding to buy enough Chrombeooks for every student while having extras in classrooms as well.

The new devices then had to be documented and assigned to every student, which has taken time, but is nearing completion.

In the event schools would have to go into full quarantine due to COVID-19, the Chromebooks will allow all students easy access to virtual learning materials.

Lumpkin said the process has been a lengthy one, starting months ago when the district had to apply for the grant funding.

However, now things are wrapping up and the district’s students will be able to take full advantage of the new technology.

“It’s just been amazing to see what (the district’s technology department) has done in this time. They’ve been efficient and effective with the distribution of Chromebooks and the students are very excited about that. They can see the light at the end of the tunnel,” Lumpkin said.

Christmas break was also discussed since the two week layoff will start on Dec. 19.

Lumpkin said the current plan is for students to return on Jan. 4 and that there hasn’t been any discussion of students not returning to school after the holidays.

“Other schools are doing other things after Christmas break, but our schedule will remain the same as it is right now. There will be no changes other than the elementary school will start at 8:45. That’s the only change, everything else will remain the same,” Lumpkin said.

The new starting time for the elementary school was part of the amended school reopening plan the Board approved during Thursday’s meeting.

Originally the elementary school had been starting at 9 a.m., but the time was moved up 15 minutes, along with a new portion being added to the plan regarding executive orders.

There have been several changes to the mask mandate by Gov. Tate Reeves throughout the year, so the district wanted to have language in the plan that allowed for the most recent executive order to always be enforced.

Following the approval of the consent agenda and policy changes, the board then moved into closed session to discuss a student/personnel matter.