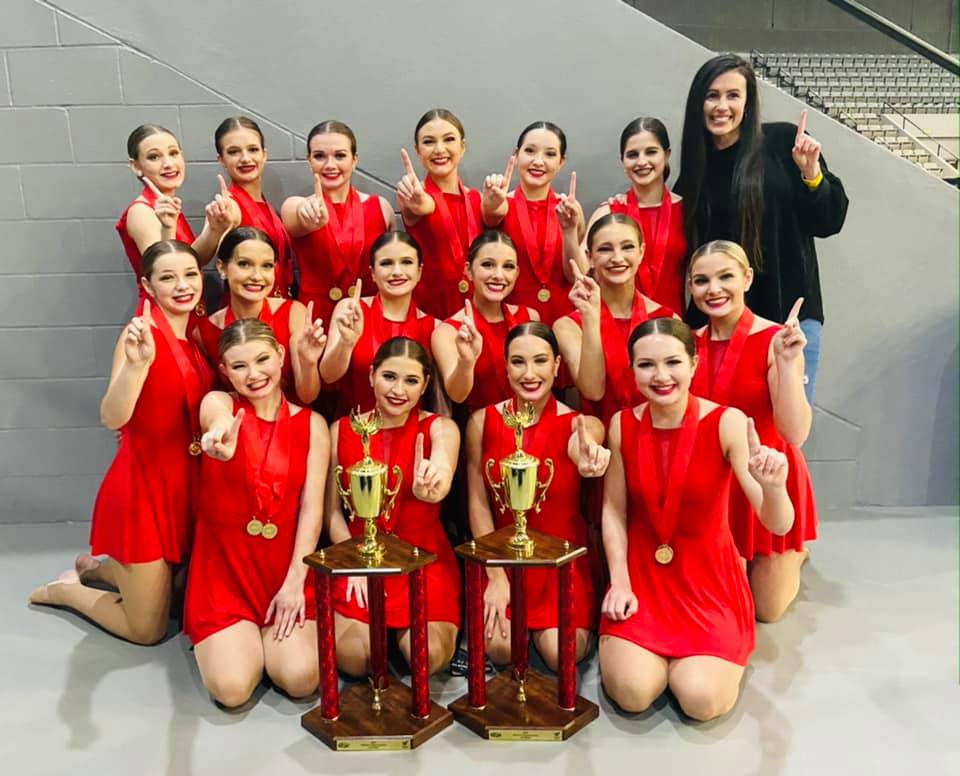 Best Of The Best: The PRC Blue Angels pose with their trophies after being named state champions in small varsity jazz and small varsity pom.

A pom routine involves the usage of pompoms along with a fast pace that includes quick intricate movements.

Jazz involves a lot of the same skills, and this year’s contemporary jazz piece by the Blue Angels involved the team’s own personal touch that won the judges’ hearts.

Varsity Dance Team Coach Sadie Penton said that since taking over the program in 2013, she’s helped guide the Blue Angels to 12 state championships over the years.

COVID-19 impacted not only the state competition, but also how the team went about preparing for it.

Penton and the Blue Angels had to deal with dancers being out due to quarantine, but being able to adapt to the unusual circumstances allowed the team to come out on top once again.

“My goal the entire year was just getting there to be quite honest. We wanted to have a somewhat normal experience and be able to get to state. It was one of those things where there’s nothing you could do about it, so you just had to adapt to the situation. It was even more of an accomplishment to do this year because of all the restrictions that were (in place),” Penton said.

Penton has instilled a championship mindset within her program, and the no nonsense mentality helped the dancers deal with this year’s unusual obstacles.

“It was more of an attitude adjustment. These are the circumstances and we can either complain about it and use it as an excuse, or just accept this is how it is and still work hard and work towards our goal,” Penton said. The team’s goal of winning a state championship was reached, but the process of the competition itself was different.

The team had to wait for a check in time before being moved immediately to the warm up area prior to any performance.

Following the performance, the team couldn’t intermingle with other teams and was even sequestered in the bleachers when it was announced they were state champions.

It wasn’t what the dancers were used to, but the distractions weren’t too much to overcome as the Blue Angels left with two new trophies. “It was different but you couldn’t get caught up in that. With my team, we were just thankful to have it at all. We were worried literally the entire year that they’d end up canceling it. We were more thankful than anything that it was taking place rather than focusing on all the changes,” Penton said.

Penton said she’s hopeful the team will still be able to put on its winter show, possibly in late January, but the uncertainty surrounding next semester means nothing is set in stone.

Still, even with all the challenges 2020 presented, the Blue Angels wouldn’t be denied some more hardware.

“I’m extremely proud of my team. They’re really amazing girls. They definitely deserve the credit for all the work they put in. There aren’t many high school kids that would put in that kind of work,” Penton said.