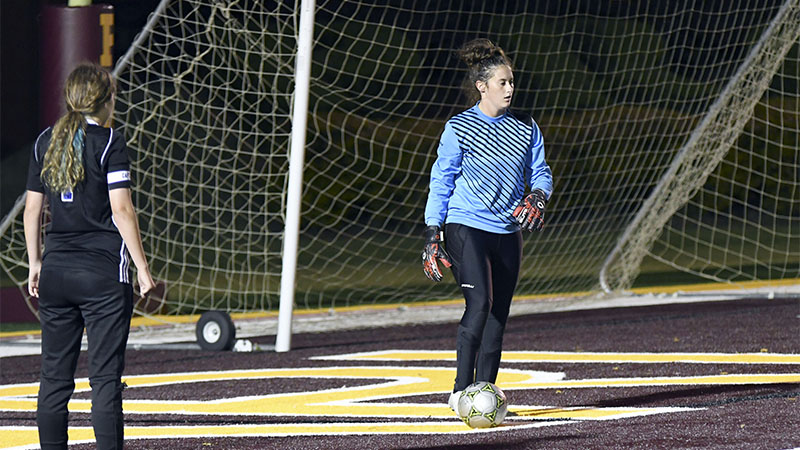 Missing Players: The Lady Blue Devils were without their starting goalkeeper and other starters when the team took on Hancock last week. Photo by Jonathan Mitchell.

Pearl River Central’s soccer teams took on the Hancock Hawks prior to Thanksgiving break with neither team able to pull out a win.

The Blue Devils lost 2-1 in a close game with Holden Dodd finding the back of the net for PRC.

Head Coach Joe Weems has emphasized the importance of his athletes maintaining their shape and staying in their area of the field during recent practices.

Not only does it make the Blue Devils harder to break down defensively, but it also allows athletes to conserve energy by trusting teammates to take care of business in their portion of the field.

Against Hancock there was some improvement in that area, and Weems is hoping the athletes continue getting better at staying in position as the season progresses.

“Our shape was a little better against Hancock. Whether or not we’ll be disciplined enough to keep that how it needs to be is to be seen,” Weems said.

The team’s first district game against Hattiesburg Dec. 8 is fast approaching and the Blue Devils will need to have themselves sorted out before district play begins.

“We only get six district games and that’s an incredibly small amount of games to make mistakes in. With both teams confidence is huge, and if you win that first game it puts you in a good spot confidence wise,” Weems said.

The Lady Blue Devils lost 6-1 to the Hawks. Alyssa Fleming provided the lone goal for PRC.

Several Lady Blue Devils starters did not play due injuries, which meant some athletes were slotted into positions they’d never played in before.

The lack of familiarity and depth created an uphill climb for PRC against Hancock.

“They didn’t play bad. We just didn’t have any subs and had people out of (position). There are no excuses though. We just didn’t play well enough and we have to figure out how to deal with (missing players) because that’s going to be the case for the rest of the season,” Weems said.

The match with the Tigers on Dec. 8 will be preceded by two tournament games this Saturday.

PRC will face Pascagoula and Harrison Central in a doubleheader this weekend. Those will be the last set of games before district play begins.

The matches will be a final warm up for the team and will hopefully serve as a way for the Lady Blue Devils to clean up some things before district play starts.

Weems said even though Hattiesburg will be the first district opponent of the season, coming away with a win might be necessary for each team’s chances at making the playoffs.

“I hate to see say it’s a must win, but because of where we are with the guys being so young and the girls being depleted, we figure we really need to win that first game. That could set the course, not only confidence wise, but also by allowing us to have more room for error down the line,” Weems said.