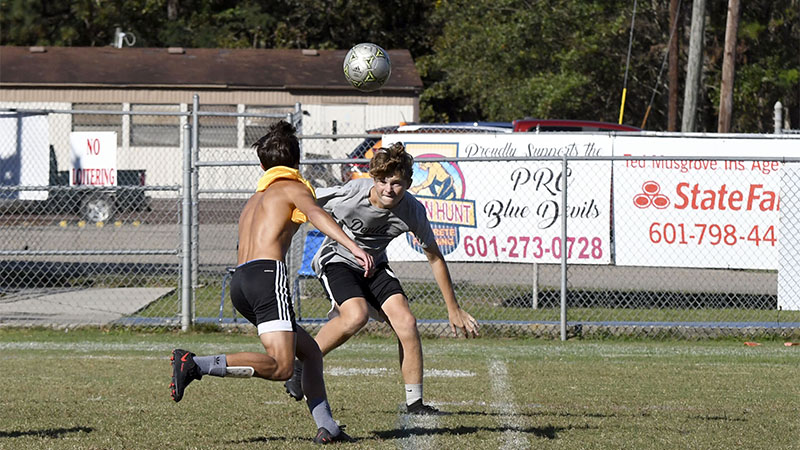 Goal Scorer: Winger Noah Verweij dips down and gets ready to head the ball on frame during a finishing drill. Verweij had two goals over the weekend for the Blue Devils. Photo by Jonathan Mitchell.

Pearl River Central’s soccer teams competed in a tournament over the weekend that saw the squads play their two final games before the beginning of the district schedule.

The Lady Blue Devils tied Pascagoula 1-1 in their first game with Monica Caro scoring on an assist from Anna Grace Atwood.

The second match up saw PRC lose 1-0 to Harrison Central, but the Lady Blue Devils were down to 10 athletes on the field after a player received a red card, and eventually Harrison Central was able to get a goal late in the game to earn the victory.

Following the two strong results, Head Coach Joe Weems said there were plenty of positives to take from the tournament performances.

“The first of which was we played two complete games and didn’t look gassed. It looked like we’re in game shape and I was very satisfied with the way they held up. There were no serious injuries, some bruises, but nothing to keep them from playing so we came out injury free (too),” Weems said.

The two match ups were the final games before the team starts district play Dec. 8 against Hattiesburg.

Weems wanted to get his players on the field in competitive match ups as many times as possible this year in order to give the younger players experience and understanding of how varsity level soccer works.

The hope is that the plethora of matches played prior to district will have helped prepare the athletes for the intensity of district games.

“The best teacher of the game is the game, so we keep putting them in specific situations so they have more time to see those situations over and over again. It’s a slow process and it’s one of those things where you can’t just tell them. They have to visually see it, so they can get an idea of what’s going on,” Weems said.

The Blue Devils’ first match up was against Pascagoula as well. The team won 2-1 thanks to goals from Noah Verweij and Brant Tarter.

The second match up against Harrison Central ended in a 5-2 loss, but Verweij again found the back of the net along with Tyler Diebold.

Weems said there were several changes made to the line up as he experimented with different combinations of players that could see playing time in district games.

The inevitability of injuries, and possibility of athletes being out quarantining because of COVID-19, has led to Weems moving players around this season in order to get the athletes comfortable playing in multiple positions.

That way if an athlete isn’t able to compete, somebody else is ready to fill that spot.

“We wanted to see if we had people hurt that we knew we’d be happy with where certain guys were playing. We’re just trying to figure it out,” Weems said.

The weekend’s games had no effect on playoff positioning either, so several up and coming athletes got some varsity minutes as Weems tries to get future starters acclimated to varsity soccer.

“I think the group coming up in the next couple of years is going to be a really good group. I’m excited to see in a couple years where the younger guys are going to go,” Weems said.

Tuesday’s match up against Hattiesburg will be away from home for PRC.