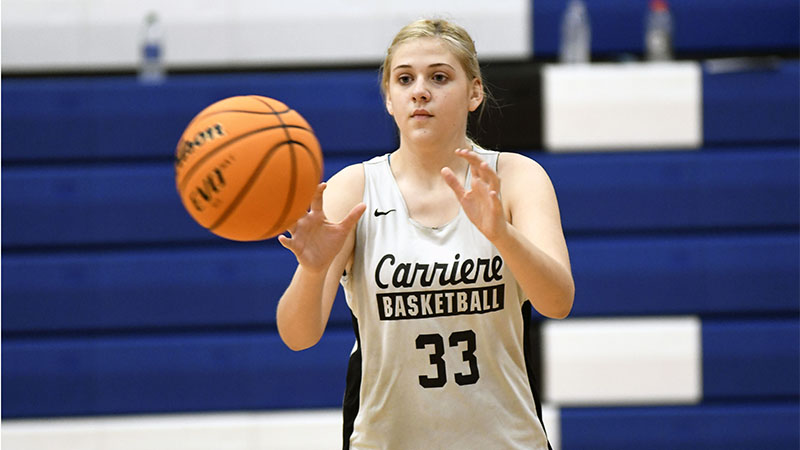 Moving The Ball: A Lady Blue Devil player receives a pass during a ball movement drill. Photo by Jonathan Mitchell.

Hannah Mitchell and Anna Carroll led PRC with 8 points each as the majority of starters sat out the final two and half quarters.

East Central was only the second game back for PRC after having a two-week layoff as the team went through COVID-19 quarantine protocols after several positive tests.

Conditioning was an issue heading into the East Central matchup because of the two weeks without basketball, so Head Coach Cliff Bauer put his athletes through several tough practices to try and get them back into shape.

There was an optional workout Saturday before the game where players could get some shots in and get back in the rhythm of things.

Then on Sunday a mandatory practice took place where the athletes were once again put to the test physically and introduced to some new plays.

“It was good to see them get up and down the court again, and to get back to an actual practice. We still looked a little rough, but (it was good that) we were able to practice on the weekend,” Bauer said.

Resting the starters was beneficial because it means they’ll be fresh for Tuesday night’s game against Greene County.

The match up against the Lady Wildcats will be the second game in two days for the Lady Blue Devils, so getting a win against East Central without taxing the athletes physically was a plus.

“It was good for them to run them and go over it, and not be worried about being competitive like (the Greene County game) will be,” Bauer said.

The Lady Wildcats will be a tough test for the Lady Blue Devils as they continue to get back in game shape.

Given PRC’s fast pace of play, Bauer said it’s going to take some more time before the athletes are back at pre-quarantine levels of fitness.

“(Greene County) is coming in undefeated tonight and if we can’t get up and down the court it could be bad. I think it’ll take another two weeks before we can get really up and down (the court),” Bauer said.

Tuesday’s game won’t be a district match up, but Bauer is hoping for another positive result to stay undefeated following the team’s quarantine.

“My highest expectation is to win, but really I would just like to see us compete. I tell the kids all the time, it’s not about winning or losing, it truly isn’t for me. It’s about the brand of basketball you put out there, and I want to put out a good game of basketball. Win or lose doesn’t really matter to me. The results will take care of themselves,” Bauer said.