PRC basketball still trying to get back in rhythm 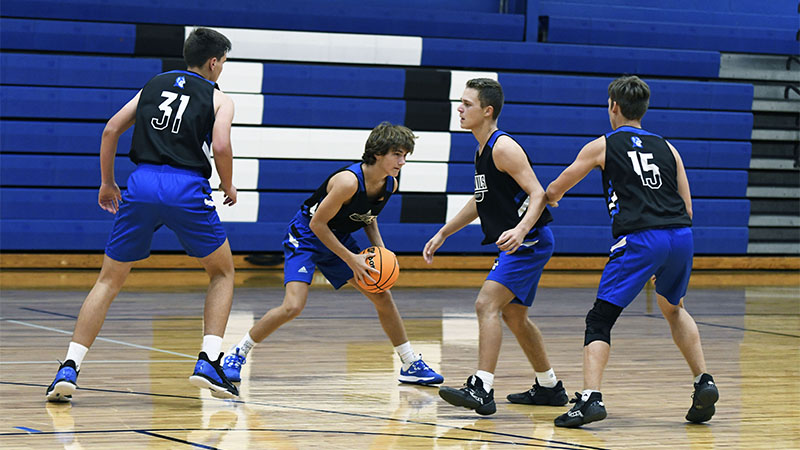 Good Start: PRC players run through a play during a recent practice. Photo by Jonathan Mitchell.

Pearl River Central’s basketball teams took on the Greene County Tomcats last week before their Dec. 11 matchup against West Harrison was cancelled because the Hurricanes went into COVID-19 quarantine.

PRC defeated the Wildcats handily 63-42 as the Blue Devils continued their hot start to the season.

Now 8-2, Head Coach Scott Stephens wanted his team to deliver a complete performance and the players answered the call against the Wildcats.

“Defensively we did a lot of good things to disrupt them, which was good to see. Offensively we got some perimeter shots to fall and that always helps as well. It was one of the (better) all around games for us,” Stephens said.

Several football players joined the squad after the football season ended and Stephens has now had a couple of weeks to get the players adjusted to the game of basketball again.

Getting the athletes minutes on the floor helps speed the process along, but Stephens said there’s inevitably going to be a transitional period that takes place.

“There’s always going to be that learning curve because we now have to get those guys into the basketball mindset. They’ve done a great job of coming in, working hard and being very coachable, which makes the transition easier,” Stephens said.

There’s been uncertainty throughout the season as the team continues practicing and playing during the ongoing coronavirus pandemic.

However, Stephens makes sure his players understand, even with the uncertainty, that it’s important to stay focused and adaptable.

“It’s something we talk about every day, control what you can control. We can’t control how the virus affects us or our opponents. We have to prepare the best way we can and plan to play every game accordingly. Sometimes the plan goes through and we’re able to play, other times we aren’t able to do that. We have to have a great understanding of the situation at hand and be ready for everything,” Stephens said.

PRC is currently scheduled to play a back to back Dec. 14 and Dec. 15 against East Central and Poplarville respectively before taking on Bay High Dec. 18.

The Lady Blue Devils took on the Lady Wildcats last Tuesday and lost 40-20.

Brennyn Dossett scored 8 points for PRC in what was a tough night offensively.

The team was scheduled to take on the West Harrison Lady Hurricanes to end the week, but West Harrison’s team had to go into quarantine, which meant they forfeited the game.

Head Coach Cliff Bauer said the cancellation wasn’t what his team needed as the Lady Blue Devils are still trying to get back into game shape following a two week team quarantine of their own.

PRC now has a game against East Central Dec. 14 followed by a county rivalry match up with the Poplarville Lady Hornets the following night.

Bauer is hoping his players use the two non-district games to not only get back into game shape, but also improve on the offensive end of the court.

“I’d like to see us score the ball better. I’d like to see us make some improvements and see us win these games because I think our team is capable of winning. We’re young absolutely, but if we play together all (of those) games are winnable,” Bauer said.