PRC and Poplarville battle on the hardwood 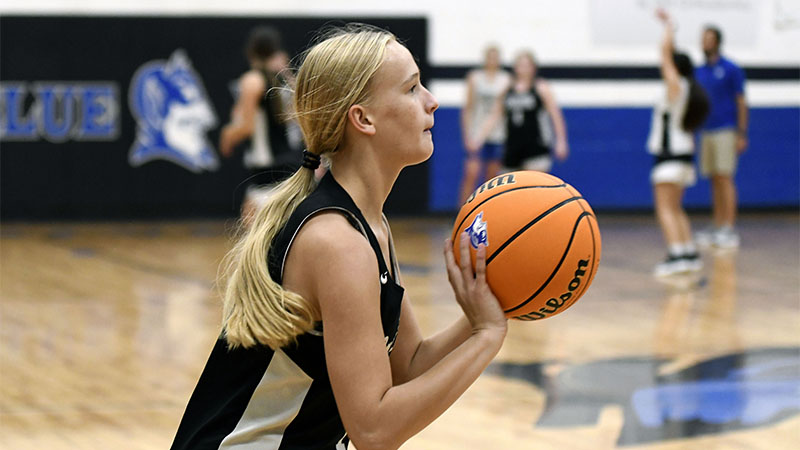 On The Wing: Hannah Mitchell prepares to take a three point shot during a Lady Blue Devil practice. Photo by Jonathan Mitchell.

Pearl River Central’s Lady Blue Devil and Poplarville’s Lady Hornets basketball teams faced off in a county rivalry match up this week with the Lady Hornets coming out on top 43-32.

Tytiana Buckley had a monster game for the Lady Hornets dropping 31 points and 10 rebounds against Poplarville.

Avory Travis added 11 points for the Lady Hornets while Brennyn Dossett led PRC in scoring with 16 points. Poplarville Head Coach Robin Jeffries said her team went into the match up with a game plan, and her team was able to execute well enough to earn the win.

“We really went into the game with two factors 1. We can’t foul, can’t foul out. 2. We have to be patient and keep control of the ball as much as we can with just seven players, and I think we did that,” Jeffries said.

With both programs used to playing in front of a raucous crowd, the sparse bleachers is just another change the players have to adapt to during the coronavirus pandemic. “With the crowd, you don’t get the student section that you generally do at PRC (because of the limits). The crowd is not a factor in any gym we go in,” PRC Head Coach Cliff Bauer said.

Jeffries said the new limits on fan attendance are another obstacle that has to be overcome.

However, as long as the team gets to keep playing, the Lady Hornets are willing to deal with any restrictions put in place.

“It’s just par for the course. It’s like I tell the kids, we’re going one game at a time. We just don’t know what’s going to happen after the holidays, so we’re just playing it short. We’ll just take this game, see what we get and start practicing for our district game,” Jeffries said.

Neither team will be taking part in a Christmas break tournament like in year’s past, but the Lady Blue Devils did add a game against West Harrison that’ll take place Dec. 29.

Bauer said he plans to have a couple of practices over the break so the athletes can stay in rhythm and maintain their fitness levels.The hope is that the shootarounds and workouts over the break will help the Lady Blue Devils be prepared for district play that will start Jan. 9 against Picayune.

“What I’d like to see is for our shooting percentage to start coming up and quit making the same mistakes we make every game,” Bauer said.