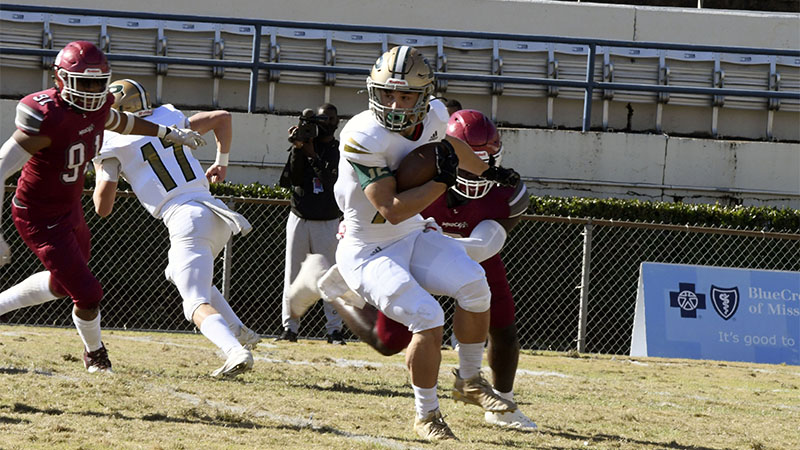 More Equipment: The $1,000 earned by Poplarville during the football team's state championship journey will be invested back in the school's athletic and P.E. programs. Photo by Jonathan Mitchell.

Poplarville High School was named the recipient of $1,000 after supporters sent in the most messages during the Mississippi High School Activities Association’s Text To Win contest.

The event took place during the week of the Hornets’ 4A State Championship football game.

The contest pitted schools and communities against their football opponents Dec. 4 and Dec. 5 at Mississippi Veterans Memorial Stadium in Jackson.

The school in each of the six games that received the most texts to a designated keyword was the winner.

Poplarville was one such winner, and because of the community’s involvement the school’s athletic programs received $1,000.

Poplarville Athletic Director Jay Beech said when the team won the contest last year the money was used to purchase fitness equipment. This year’s prize will likely be spent on similar items.

The contest is one that rewards the most involved community, and Beech said it meant a lot that Poplarville came together to win extra funding for the school’s athletic programs.

“It’s cool that our community comes out and supports us in anything we do, even in a competition like this. Our community gets out and does their part, and that will help our athletic and P.E. programs,” Beech said.

A financial boon is welcome, but especially so during this COVID-19 year.

Teams aren’t making as much money as they have in the past due to attendance limits, and they’re having to spend more money on transportation and sanitation equipment.

Having another $1,000 will be useful as Poplarville deals with the financial consequences of the pandemic.

“Every little bit helps for sure, especially when, with our community, all we had to do was get out and text on the phone to win $1,000,” Beech said.

There are many lessons to be learned outside the classroom and athletics can greatly contribute in the development and maturation of a high school student.

“Athletics is a huge part of a high schooler’s life. For a good percentage of kids that’s what keeps them coming and keeps them active. It’s a necessity for high schools to have athletics and activities so you’re getting your academics, but also the discipline, commitment and character from sports. It’s huge and funding these things is huge too,” Beech said.