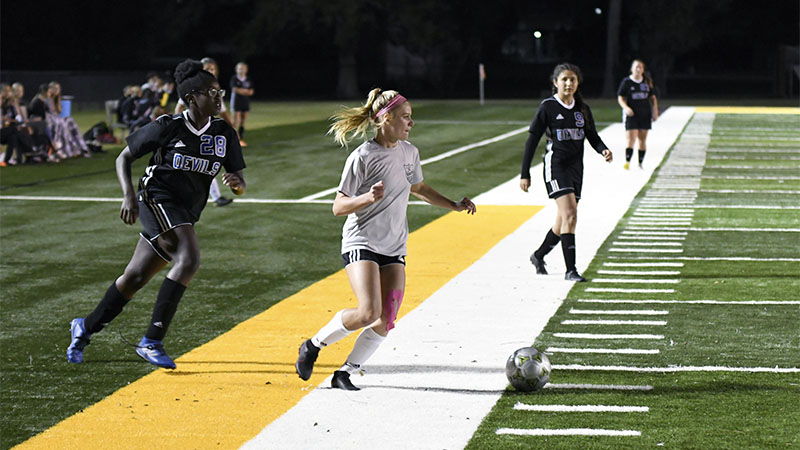 Open Space: Winger Morgan Westling cuts inside and looks for an open teammate in the box. Photo by Jonathan Mitchell.

The Lady Hornets defeated Stone 1-0 in a key victory against one of the best teams in the district.

Juliana Wells converted a penalty kick for the only goal of the game as Poplarville was able to grind out the tough win.

Head Coach Beth McShea said the result against Stone served as validation for the players after working so hard this season to get a win like that against a quality opponent.

“For them it’s a major confidence booster and a major reminder of what they are already. That they’re there, that they’re as good as we’ve been telling them. It just made them believe it a little bit more. The kids were pumped and they played their hearts out,” McShea said.

The team will now start preparing for another district matchup against Forrest County Friday night.

Poplarville is 2-0 in district and will be looking to keep that perfect record, but McShea said she’s warned her team to not get complacent as the Lady Hornets get further into district play.

“With every district game I’ve been telling them the same thing, play it like it’s the first district game. Don’t worry about who the opponent is. You have to have the same intensity with every (district) game because you don’t know what can happen,” McShea said.

The Hornets and Tomcats were so evenly matched that it took overtime to determine the winner.

Goals from Zach Carpenter and Bryson Andrews tied the game at 2-2 as time ran out.

Overtime ended up being the deciding factor as Stone County scored two goals to win the game 4-2.

Several players were out of the starting line up due to injury, which meant some athletes had to play out of position against one of the best teams in the district.

The circumstances surrounding the game and gutsy performance has Head Coach Luke Gipson expecting big things from his squad for the rest of the season.

“I didn’t know how we would match up. I thought we’d play well, but I was really pleased with our performance, especially with who we were missing, guys out of position and guys taking on new roles,” Gipson said. The team is now 1-1 in district play after defeating Purvis prior to the Stone County match.

It’s a strong position to be in heading into a Dec. 11 match up against Forrest County.

Gipson let his varsity players have the day off after the Stone County game because of the physical toll of that game.

However, preparation will ramp back up as Friday approaches given the importance of getting another district win with the possibility of a COVID-19 quarantine hanging over every team’s head.

“It will be a little more intense. Every (district) game is so important because we could win this game and then have to forfeit a game we would win later (in the season),” Gipson said.

Gipson said the unusual circumstances forced his athletes to understand the importance of living in the moment and enjoying the games, especially after sports were cancelled prematurely last spring.

“I think it’s allowed me as a coach to get the point across to play (every game) like it’s your last. You can say that so much, especially to seniors… but I think they’re finally getting a glimpse that this may be the last week or last game. You can see they’re making little efforts to enjoy it more with their friends around them and that’s inspiring for me,” Gipson said.

The Forrest County game will be at home with the girls match starting at 5:30 p.m. and the boys taking the field at 7 p.m.