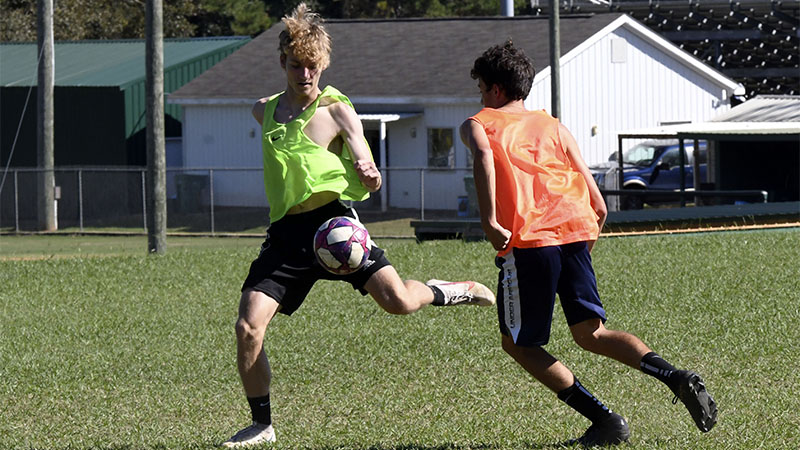 The Poplarville Hornets soccer teams took on the Purvis Tornados Tuesday night with both teams earning victories in the squads’ first district games of the season.

Poplarville defeated Purvis 7-1 as several players got involved in the scoring. Bryson Andrews put four in the back of the net, while Spencer Stuart, Seth Santiago and Devin Ladner each added a goal of their own. Head Coach Luke Gipson told his team that the early season losses to top tier teams would pay off once district play began, and the result against Purvis was proof the strategy yields positive results.

“I thought it helped us out tremendously just because we were under pressure a few times and dealt with it differently. You could tell by how they were carrying themselves they felt good about the game and the possibility of winning,” Gipson said.

Getting a win to start district play is an important first step for the Hornets since they have playoff aspirations.

However, the performance wasn’t perfect with Gipson wanting to see some things cleaned up as the squad moves further into district play.

“Our communication from defense forward needs to get better. There were opportunities where Purvis would clump and we’d simply not speak up and say, ‘Hey switch the field.’ A lot of times we just try to stay on that side of the field and force it,” Gipson said.

The Hornets have one more non-district game before every match will start affecting playoff positioning, and that’s Thursday’s match against Sumrall. Seeing as the game won’t have an impact on the team’s postseason hopes, Gipson said there’s a good chance some inexperienced players could get significant time on the field. “For me, and over the past few years I’ve learned this, if I can get some younger guys in a quality game that’s non-district that really pays off. They need to be thrown in the fire in the second half and we’ll use that game for evaluation for what we’ll be next year,” Gipson said.

The home game will begin at 7 p.m.

Head Coach Beth McShea said the team did a good job with ball movement, but it took a little bit for the team to get going.

Poplarville is used to aggressive opponents who apply pressure and play physically, so when that’s not the case it takes some adjustments.

“If a team is stand off-ish, not so much trying to be the aggressor, not trying to be a team that’s going to get a lot of fouls called against them, it takes a little bit of time for us to get going because we don’t know how to handle that,” McShea said.

Two starters were out of the game due to injury, which forced some changes to the starting line up.

Seeing as the performance level didn’t dip, McShea said the match against Purvis was useful in evaluating what players could contribute in a high stakes district game. “Being able to see that other people could fill in, in a pressure situation where it’s a district game, and still be able to come away with good solid win (is helpful),” McShea said.

Next up for the Lady Hornets is Sumrall on Dec. 3 before an important district match, away from home, against Stone County on Dec. 8. Getting a win against a tough non-district opponent like Sumrall could prove beneficial heading into the Stone match up.

“If we can get a win then spirits will be high going into Stone on Tuesday, and even if we don’t get a win it’s always a great game for the girls because (Sumrall) has such good competitiveness. How we handle Sumrall will let me know more about what Stone (will be like),” McShea said.