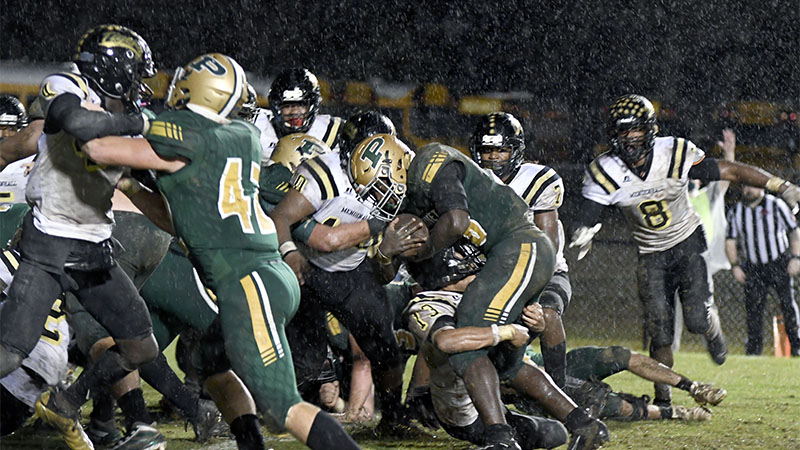 Goal Line: Running back DJ Richardbey forces his way towards the end zone as a defender tries to bring him down. Richardbey had 109 yards, a touchdown and a two-point conversion against the Tigers.

The Poplarville Hornets varsity football team is one win away from being named 4A state champions after defeating Mendenhall 35-6 last week.

The trio has been key to Poplarville’s success offensively this season, running behind a dominant offensive line.

It took a couple games for the Hornets to find a rhythm, but the team has now won 10 straight games.

“We started off 0-3. We played some good opponents in our first three games, but we’ve gotten better each and every week. Offensively we’re playing at a high level right now and we’ve been playing good defense, too,” Poplarville Head Coach Jay Beech said.

Poplarville hasn’t let the unusual circumstances of a pandemic distract them from the ultimate goal, winning a state championship.

Not only has preparation and performance been key for Poplarville, but Beech said the community’s impact couldn’t be understated when it comes to this season’s success.

“We have a very strong following here in Poplarville. This community loves football and I’m blessed to be the coach of this team. Our kids feel it every Friday night and it’s just a pleasure,” Beech said.

Poplarville has defeated every opponent in the playoffs and will now have to take on a 13-1 Louisville Wildcats team in the state championship game.

Louisville is on a long win streak of its own, up to 12 games now, and the Wildcats will serve as the Hornets’ final obstacle in claiming a state championship.

“We have a great opponent we’re playing. They are a well-coached team. They have a great defense and force you to make mistakes, and if you do make a mistake they make you pay for it,” Beech said.

Beech and the Hornets have made it to the state championship a number of times, including last year when the Hornets lost to Corinth 55-21.

Poplarville knows how special it is to be in this position, just one win away from being named state champions.

“It’s not easy and we’re thankful for it. We know it’s a special time to come to Jackson and we’re going to do our best,” Beech said. The game will be played at Mississippi Veterans Memorial Stadium in Jackson on Saturday Dec. 5.